The former 5-star shined on defense, offense and special teams for Trinity Christian Academy in Jacksonville, Fla. He has good size for a corner at 6-foot-1 to go with plenty of length, speed and athleticism. Davis used those traits to excel in coverage and has great instincts that he uses to attack the ball when it is in the air.

However, the Clemson coaches were hoping to bring him along a little slower this spring, especially with Derion Kendrick back as a starter at one corner spot and Mario Goodrich and Andrew Booth on the other side.

But injuries are a part of football and just a few days into spring practice, all three veteran players were out. Booth was still recovering from a knee scope in January. Goodrich had a foot injury and Kendrick tweaked his hamstring.

What did the Clemson coaches do? They had no choice but to throw their freshman into the deep end of the pool and hope he wouldn’t sink.

Though Kendrick came back to practice prior to the Tigers’ scrimmage on March 11, the last practice Clemson had before the COVID-19 pandemic shut everything down for the rest of the spring, Davis was just one of three scholarship corners Clemson had working for the majority of the spring.

Sophomore Sheridan Jones and junior LeAnthony Williams were the other two scholarship players. That left Davis, who enrolled at Clemson in January, working and getting a lot of reps in practice, along with walk-on Jake Herbstreit.

“His head is spinning if you ask him, for sure,” Venables said at the time.

But the coaches hope the work Davis got in will benefit him and the Tigers in the fall.

With a 36-inch vertical, Davis possesses the playmaking ability to go up and get the football. He is also physical enough to play press coverage and does not mind helping with run support when he needs to. According to Venables, he gives a lot of effort and has no shortage of competitive fire.

Davis has a lot of tools for the Tigers to work with, and he has tremendous upside.

“Fred has done well. He loves to compete. He is always ready to go,” Venables said. “He is just learning how to practice and is learning what to do. He is getting baptized.”

And though things are tough right now, getting all the extra reps in can only benefit Davis and the Tigers in the future.

“We split it up and have two skellies going on at once. I think we have three scholarship corners that are healthy right now. So, he is getting a bunch of reps,” Venables said. “Fred is fun to be around. He has a great attitude and is really a hard worker.” 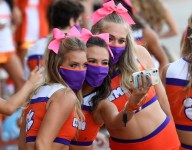