Who is better, Lawrence or Fields? Why is there a debate?

Who is better, Lawrence or Fields? Why is there a debate?

Where have we seen this before?

Someone out there is already starting to write that Ohio State’s Justin Fields is a better quarterback prospect than Clemson’s Trevor Lawrence in the 2021 NFL Draft.

Pro Football Focus came out on Saturday saying Fields will be the better prospect in the 2021 NFL Draft. This is not the first time the opinions of “Who is better, Lawrence or Fields?” debate has occurred.

It happened when the two players were coming out of high school, too. Prior to the 2017 football season, Lawrence was everyone’s hands down top-rated player. Then, starting in the summer of 2017, Fields moved to No. 1 in the ESPN rankings. Lawrence stayed as the top player in the nation by Rivals and 247Sports.

Both players have proved worthy of their rankings to this point in their college careers.

Lawrence guided Clemson to a national championship as a true freshman and last year took the Tigers back to the title game. He won his first 25 starts in his college career prior to losing to LSU in the College Football Playoff National Championship.

Lawrence did not throw an interception in his last eight games, ending the season with 239 consecutive passes thrown without an interception, breaking his own Clemson record. 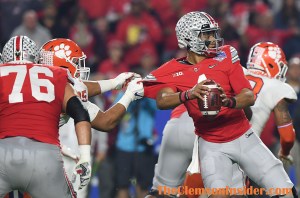 In his first year at Ohio State, Fields threw for 3,273 yards with 41 touchdowns and just three interceptions. However, two of those interceptions came in the loss to Clemson, including one in the end zone in the game’s final seconds which secured the Tigers’ 29-23 come-from-behind win in the Fiesta Bowl.

Fields, who is 13-1 as a starter, also ran for 484 yards and 10 touchdowns, though he played the last three games of the season on a bump knee.

In their only head-to-head matchup to this point, Lawrence won MVP honors in the Fiesta Bowl after he engineered the fifth-best comeback in Clemson history, while completing 18-of-33 passes for 259 yards with two touchdown and no interceptions.

In all, Lawrence totaled 366 yards, adding a career-high 107 rushing yards on 16 carries, including a 67-yard touchdown to his total.

Fields did throw for 320 yards and one touchdown against the Tigers, but as mentioned before, he threw two interceptions and ran the ball for just 14 yards on 13 carries.

It is funny the debate on “Who is better?” is starting again for these to Georgia natives, who share the same personal quarterbacks’ coach back at home.

In reality, there probably should not be a debate. Both are elite college quarterbacks, and both will be picked high in the NFL Draft when they do decide to come out. Both, likely, will also have good NFL careers.

Also, and more importantly, they have at least another year of college football to play. So, why are we debating this?