Clemson athletes now have a tough decision to make

Clemson athletes now have a tough decision to make

NCAA will allow schools to provide spring-sport student-athletes, who lost this season, an additional year

There will be some student-athletes at Clemson that will have a tough decision to make in the weeks to come as it pertains to their collegiate careers, especially this year’s seniors.

The NCAA Division I Council voted Monday to allow schools to provide spring-sport student-athletes an additional season of competition and an extension of their period of eligibility due to losing a season of eligibility because of the COVID-19 pandemic.

The Council also increased the roster limit in baseball for student-athletes impacted by the COVID-19 pandemic, the only spring sport with such a limit.

The Council also will allow schools to self-apply a one-year extension of eligibility for spring-sport student-athletes, effectively extending each student’s five-year “clock” by a year. This decision was especially important for student-athletes who had reached the end of their five-year clock in 2020 and saw their seasons end abruptly.

“The Council’s decision gives individual schools the flexibility to make decisions at a campus level,” said Council chair M. Grace Calhoun, athletics director at Penn, in a statement from the NCAA. “The Board of Governors encouraged conferences and schools to take action in the best interest of student-athletes and their communities, and now schools have the opportunity to do that.”

Winter sports were not included in the decision. Council members declined to extend eligibility for student-athletes in sports where all or much of their regular seasons were completed.

The Division I council also reported member institutions adjusted financial aid rules to allow teams to carry more members on scholarship to account for incoming recruits and student-athletes who had been in their last year of eligibility that might decide to return to school for another year.

However, due to the fact there is so much financial uncertainty, the Council’s vote also provided schools the flexibility to give students the opportunity to return for the 2020-’21 sports year without requiring that athletes aid be provided at the same level awarded this past year. 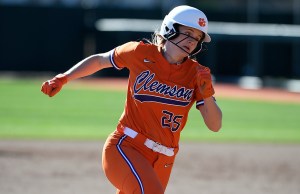 This rule only applies to student-athletes who would have exhausted their eligibility this spring, such as Clemson pitcher Carson Spiers on the baseball team and first baseman MK Bonamy and infielder Ansley Gilstrap on the softball team.

“I don’t know where MK stands regarding eligibility… I think there are still a lot of questions up in the air and people are still thinking about next year and the next two years look for them depending on what year they are next year,” Clemson softball standout Marissa Guimbarda told The Clemson Insider last week. “I think everyone has to make the best decision for themselves and that is going to have to be a personal decision that they are going to have to make.”

Schools also will have the ability to use the NCAA’s Student Assistance Fund to pay for scholarships for students who take advantage of the additional eligibility flexibility in 2020-21.

Bonamy, a redshirt senior who transferred from Notre Dame to play her final season at Clemson, appeared in all 27 games for the Tigers before the COVID-19 pandemic shut down the season. She had a .314 batting average, which included three home runs and 24 RBIs. She also had a .488 slug percentage thanks to her six doubles.

Gilstrap, also a redshirt senior, had a season-ending injury prior to the start of the season.

“We are going to give those decisions time. I think both players deserve that,” head coach John Rittman said on March 20… With [Gilstrap], we are in the process of doing an appeal for her because she had a season-ending injury in her fifth year.

“[The end of the season] just happened that we want to make sure we give our players enough time to make decisions. This is a decision that needs a lot of thought and time to make.”

Spiers, a true senior on the baseball team, was off to a great start. In nine appearances and 15 1/3 innings pitched, he had a 0.00 ERA, while racking up a 3-0 record and recording for saves as the Tigers’ closer. He allowed just one unearned on five hits, while striking out 17 and walking just three batters.

It might be a while before Spiers can make his decision. He will have to wait for the MLB Draft in June, which right now is not sure how many rounds it will be. Being drafted, and in what round, if indeed he does get drafted, will go a long way in the righty’s decision to come back to Clemson or not.

—NCAA Communications contributed to this story