Swinney has ‘zero doubt’ football will be played this year

Swinney has ‘zero doubt’ football will be played this year

While many have expressed pessimism about whether the college football season will start on time, or whether there will even be a football season at all due to the coronavirus pandemic, Dabo Swinney is on the opposite end of the spectrum with a very optimistic outlook.

Clemson’s head coach was asked during a media teleconference Friday that if it comes down to it, whether he would prefer to see the season begin as scheduled with an abbreviated preseason camp, or delay the season until the spring so everything can be on a full schedule.

Swinney’s answer was clear and straightforward.

Right now, Swinney isn’t planning for any possible changes to the football season – he is simply preparing as if there will be a football season per usual and he needs to make sure his team is ready for it.

“That goes back to when I first became a head coach, I had a lot of people telling me I need to have a plan to win and a plan to lose,” he said. “I did that early on, and then I haven’t done that in a long time. I got one plan, and that’s a plan to win. And if it doesn’t go that way, well, I can figure that out in about three minutes. So, that’s just my mindset. I’ve got one plan, and that is to get the Tigers ready to play come September or late August or whatever.”

Things may look bleak right now regarding the coronavirus crisis and the nation’s recovery from it, but Swinney has complete confidence our country will prevail over the disease.

“I mean, this is America, man,” he said. “We’ve stormed the beaches of Normandy, we’ve sent a car and drove around on Mars, we’ve walked on the moon. This is the greatest country and the greatest people in the history of the planet. We’ve created an iPhone that I can sit here and talk to all you people all these different places. We’ve got the smartest people in the world. Listen, we’re going to rise up and we’re going to kick this thing right in the teeth, and we’ll get back to our lives. That’s a long time away, man. I mean, this is April the 3rd.”

Swinney looks forward to the scheduled season opener at Georgia Tech on Sept. 3 and then being back in Death Valley on Sept. 12 for the Tigers’ home opener against Louisville.

“I’ve got one focus, and that’s getting the Tigers in camp in August and getting ready for Georgia Tech and getting in the Valley in September, and I can’t wait to celebrate with all the Tiger fans,” he said. “In fact, we got us an acronym for T.I.G.E.R.S., and it stands for ‘This Is Gonna End Real Soon.’ So, that’s the only mindset we’ve got. All the rest of that stuff, I’ll let all the other smart people figure out all them doomsday scenarios. I got one scenario, and that is running down the hill and kicking it off in the Valley.” 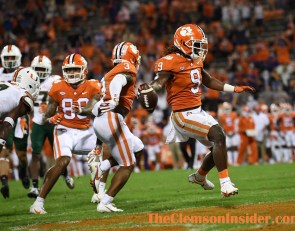 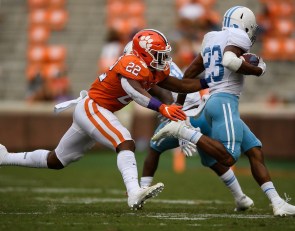