Let me get this straight. If you are a pessimist, and you have a large platform to spout off your opinions to thousands of people, and in some cases millions, then you have the right to believe you are right and anyone who has a different point of view is wrong.

However, if you are an optimistic person, and you have a large platform to speak your mind to thousands and millions of people, then you are likely to be attacked by the pessimist I mentioned above. You are going to be called naïve, dumb or just plain ignorant because you believe something different than they do.

See, in their eyes, your opinions and beliefs, are all wrong because you look at a glass that is half full and anyone who looks at a glass as half full, as opposed to half empty, is someone no one should listen to. At least that is the way a lot of my colleagues in the media are coming off these days.

How dare Dabo Swinney—when he was asked his preference, by the way—feel there will be a college football season this year. And how dare he say he has no doubt the Tigers will be running down the hill at Death Valley in the fall. What a horrible thing to say.

“How could you do that Dabo? Don’t you know we are all supposed to sit in our house and have no hope that we will ever be able to go back to our normal lives again? Don’t you realize that we are supposed to live in fear and allow the coronavirus to control the rest of our lives? How dare you preach optimism, hope and faith at a time like this.”

That is the way a lot of these guys sound, whether they mean to or not.

There was nothing wrong with what Dabo Swinney said to the media last Friday and then what he reiterated Monday to Mark Packer on ESPNU Radio. Swinney was asked, in each case, his opinion. And, like any of us, he gave his opinion. Whether you liked what he said or not, it was his opinion.

But no, he isn’t allowed to have an opinion. He is too positive.

Or, as an ESPN personality said, “Stop being stupid, Dabo. ‘Cause right now you’re being stupid.”

That ESPN personality is Bomani Jones, who is the co-host of the network’s show “Highly Questionable.”

Granted, Jones gets paid to give his opinion, but is it right to call Swinney stupid for what he believes.

“What’s so dangerous about what he’s saying is, he’s acting like we can just wish this thing away and that’s not what it is,” Jones said.

No Mr. Jones, that is not what Swinney said at all and it is definitely not how he is acting. How about do your homework and go back and, first, listen to the question that one of your own colleagues at ESPN asked. Then listen to all of Swinney’s answer.

Clemson’s head coach was asked if it comes down to it, whether he would prefer to see the football season begin as scheduled with an abbreviated preseason camp or delay the season until the spring so everything can be on a full schedule.

Swinney’s answer was clear and straightforward.

Swinney answered the question with “My preference” and then later said, “I think.”

He answered a question and then he gave his opinion appropriately.

“That goes back to when I first became a head coach,” Swinney said. “I had a lot of people telling me I need to have a plan to win and a plan to lose. I did that early on, and then I haven’t done that in a long time. I got one plan, and that’s a plan to win. And if it doesn’t go that way, well, I can figure that out in about three minutes.

“So, that’s just my mindset. I’ve got one plan, and that is to get the Tigers ready to play come September or late August or whatever.”

Guys like Jones have since criticized Swinney, acting as if the Clemson coach is going to put his players and coaches in harms way. Since when has Dabo Swinney given anyone the idea he would do such a thing.

Again, if anyone would take the time to sit down and listen to his comments from Friday and on Monday, then they would understand it.

“As I said the other day, all that I live my life on is faith,” Swinney said to Mark Packer on ESPNU Radio this past Monday. “I think faith and fear are exactly the same thing. It is in believing in something you can’t see. So, I just chose faith. I just believe in our country. I believe in this world. I believe in unbelievably smart people that we have out there. But more importantly, I believe in God.

“I believe, believe, believe in God. He is so much bigger than this. There are so many fearful things, but God can stamp this thing out just as quick as it rose up. I don’t have any doubt that is what is going to happen. That is my belief.” 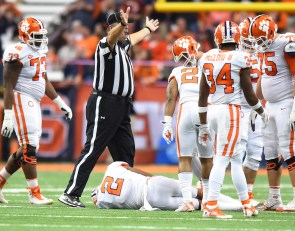