Muse ready to prove he can make position switch in NFL

Muse ready to prove he can make position switch in NFL

As a senior at Clemson in 2019, Tanner Muse paid attention to the Raiders during the NFL season to stay up to date on how former Tigers Clelin Ferrell, Hunter Renfrow and Trayvon Mullen were faring as rookies with the organization.

Now, Muse is a member of the franchise himself and will once again be teammates with Ferrell, Renfrow and Mullen after being selected by the Raiders in the third round of the 2020 NFL Draft with the 100th overall pick.

“I always tried to keep up with them, to see their record and make sure they were doing all right,” Muse told reporters on a conference call after being drafted. “Me and Cle, we always have stayed in touch. We’re basically best friends. We came in (at Clemson) together, we grinded it out together. He left a little earlier than me, but we ended up in the same destination. So, I’m super blessed to be able to get back with those guys – him, Hunter, Trayvon. Trayvon’s one of my brothers as well. We’ve been together on the same side playing at Clemson, so I’m really looking forward to seeing them boys again.”

Muse admitted he didn’t truly expect to come off the board on Day 2 of the draft (Rounds 2-3), but believes he helped his stock with the Raiders thanks to a conversation he had with head coach Jon Gruden and general manager Mike Mayock about a week and a half before the draft.

“I had a pretty good feeling with the Raiders, just from that video call I had. It was one of my better ones,” he said. “I thought I could slip into the third round, and I really felt as just a player, teams were really going to give me a chance in the third round. My family really thought it, but realistically, I thought I might have been more of a Day 3 guy just because there hasn’t been a lot of hype around me. But I think Coach Gruden and Mr. Mayock really took to what I put on film and they knew what they were getting as a player, and I’m super excited to come down and start playing.”

Muse played in 59 games for Clemson, starting 39 of them, and finished his highly productive college career with 237 total tackles (10.5 for loss), 15 pass breakups, 4.0 sacks, seven interceptions (including a 64-yard return for a touchdown), a forced fumble and a 63-yard fumble return for a score. The native of Belmont, N.C., was a third-team All-ACC selection in 2019 before earning first-team all-conference and third-team AP All-American honors in 2019.

While Muse was mostly a safety for the Tigers, he will be a linebacker for the Raiders, in addition to a special teams player, and said he has had a good idea for a while that he would likely end up at linebacker in the NFL. He even indicated that he played some linebacker late last season.

“We always knew at Clemson that the potential was going to be there (to play linebacker), but we just couldn’t build enough depth at safety, and it forced me to stay in that position to play so we could really gain some depth with the young guys,” Muse said. “Then, toward the end of the season, we got more guys to be able to play that position where I could come down to linebacker more. But it’s always been something I’ve been conscious about. Just talking with Coach Swinney, a lot of the teams wanted to see me play there, so it’s always been something that I’ve thought about and we’ve really been training for. So, the main thing is just going out there and showing that I can do it.”

Muse couldn’t be happier to join the Raiders ahead of what will be their first season in Las Vegas after moving from Oakland. 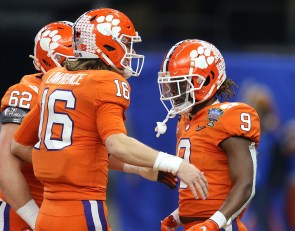