After he was selected by the Philadelphia Eagles in the fourth round of the 2020 NFL Draft on Saturday, former Clemson safety K’Von Wallace sent out the following Tweet:

Wallace, of course, is referring to the late legend Kobe Bryant, the five-time NBA champion and 18-time All-Star who was born in Philadelphia.

The “Black Mamba” is a hero to Wallace, and he believes he will bring Bryant’s “Mamba Mentality” with him to Philly as a member of the Eagles.

“I feel like that’s one of the biggest reasons why I’m competitive,” Wallace said during an interview with reporters on Eagles Draft Central, posted by the team’s official Twitter account. “I feel like obviously God blessed Kobe with abilities, but I feel like his competitive nature is what made him Kobe and what made him have that Mamba Mentality. That’s what made him known around the world to be a competitor. The way he played the game — the tenacity, the grit, the anger, the happiness, the sadness, everything that he played through, all the injuries … You look at his injury history, and just seeing him still grinding and giving all he had, 80-point games, all types of things that he did to put his team in the best position to win, and I feel like that’s the type of player I am. I have that Mamba Mentality, I have that Kobe mentality to go out there and compete, go out there and do everything I can whether I’m hurt, whether I’ve got broken fingers — it doesn’t matter. I’m going to sacrifice my body for this game and for my team, and I feel like that’s exactly what he did and that’s why he was a big inspiration to me and a big idol to me.”

Wallace is the third Clemson defensive back selected by the Eagles all-time, starting in 1996 when the franchise drafted Pro Football Hall of Famer Brian Dawkins.

While Wallace sees himself as a different player than Dawkins was, he knows Dawkins well and shared a dorm room with his son, Brian Dawkins Jr., at Clemson.

“My game is unique,” Wallace said. “I feel like I’m a guy that has a unique type of style, a different type of style, a new type of style of play. So, I wouldn’t say I model my game after him, but I definitely took bits and pieces of the greats to do that, and he’s definitely one of them. I’m actually close friends with his son. Me and his son were roommates our first two and a half years together at Clemson, and I met him throughout the whole process, and they’re like family to us. My mom knows his mom very well. They communicate here and there. But we never really talk much football. We just talk about life, we just talk about our spiritual selves because he’s a man of God first, and he always wants his son and I to be heavy in the Word and be driven spiritually because that’s where your passion comes from, and football will all take care of itself when you got the right things in place.”

An All-ACC selection in 2019, Wallace completed his four-year Clemson career with 178 total tackles (5.5 for loss), 21 pass breakups, five interceptions, including one returned for a touchdown, two sacks and two forced fumbles.

The Eagles are getting a Swiss Army Knife in Wallace who can do it all in the secondary.

“What makes me a great safety is the fact that you get multiple positions out of me,” he said. “I can play corner, I can play nickel, I can play safety in the box, I can go blitz for you — I can do anything for my team, put my best abilities in place to put my team in the best position to go out there and win games, win championships. I’m a guy that plays with passion, a guy that plays with a lot of heart, a guy that loves the game, a guy that’s going to do everything he can to get the upper hand on my opponents, whether that’s watching film or extra work after practice. I’m guy that’s just hungry and is going to go get it.”

Wallace departed Clemson tied for the most career games played in school history, matching the 59 by Christian Wilkins, Tanner Muse and Cannon Smith. He played in three national championship games, winning two of them with the Tigers, and expects his big-game experience to serve him well at the next level.

“If you watch me play, man, you notice that when the lights are on, big games, I shine and that’s when I play my best,” he said. “Being in the NFL, you’re playing in front of millions every game, and I feel like that’s when I play my best. So, you’re going to get the best performance, best abilities, everything great about who K’Von Wallace is as a player, especially when that pressure is on. I feel like every game’s going to be pressure, every game’s going to be that big light, that big opportunity to go out there and show and prove yourself, and I feel like I’m going to be that guy to go out there and prove myself every single night, in practice and on game day.”

Wallace is already feeling the love from Eagles fans and is ready to get to work in the City of Brotherly Love.

“The Eagles’ fan base is the best I’ve seen. It’s up there with Clemson, man,” he said. “Seeing how they supported me, even before I even got drafted. During the first round, they were telling the coaches to pull the trigger, and all these fans DMing me on Instagram and saying ‘We can’t wait for you to be an Eagle.’ The fan base is incredible. It’s incredible, man. The players there, I don’t know too much specifically, but I know that with me, I’m going to get to know them. I’m going to love this program and I’m going to do everything I can to put my team in the best position to win.” 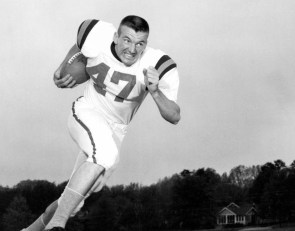