Who are Clemson’s next breakout stars?

Who are Clemson’s next breakout stars?

Since the days of James Davis and C.J. Spiller Clemson has produced some electrifying offensive weapons.

Of course, Sammy Watkins and Deandre Hopkins became the breakout stars in the early years of Dabo Swinney’s head coaching career. The two wide receivers combined for 2,197 yards and 17 touchdowns in 2011 and 2,113 yards and 21 touchdowns in 2012.

In recent years, it has been Tee Higgins and Justyn Ross making big time plays, along with running back Travis Etienne. In the 2019 College Football Playoff, Higgins and Ross were unstoppable, as they became a nice one-two punch for quarterback Trevor Lawrence that embarrassed the Notre Dame and Alabama secondaries.

Etienne became the ACC Player of the Year in 2018 and again in 2019, as he has broken just about every career and single-season rushing record at Clemson.

So, who is next? Who are the next breakout players for the Clemson football program heading into the 2020 season?

How about Joseph Ngata and Frank Ladson?

With Higgins now in the NFL playing for the Cincinnati Bengals, Ngata and Ladson will have a shot to be the newest weapons in a Clemson arsenal that will be as potent as ever before. 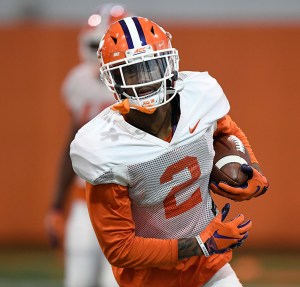 The potential is there for both young receivers to be the next big thing at Clemson. Besides their ability to make plays, they are both tall receivers. Ngata is 6-foot-3 and weighs 215 pounds, while Ladson is also 6-foot-3, but he checks in at 195 pounds.

In spring practice, Swinney was impressed with the growth of both receivers and he feels they are both ready to become main contributors in an offense that still has Ross and senior Amari Rodgers, as well.