With Chase Brice now at Duke after transferring from Clemson following the 2019 season, the Tigers will enter the 2020 season with no college proven backup quarterback but two very talented options.

One of those is redshirt freshman Taisun Phommachanh, who competed with true freshman D.J. Uiagalelei this spring to replace Brice as the No. 2 quarterback behind Trevor Lawrence, and will continue to battle it out with Uiagalelei in fall camp.

When he went through spring practice as a newcomer last year, Phommachanh was overwhelmed and needed time to adjust to the speed of the college game, which was moving fast for him at the time. But things were different this spring for Phommachanh, who was a lot more comfortable, confident and in control with a year of experience under his belt.

“Taisun is a guy that obviously probably is kind of lost in the middle right there,” Clemson offensive coordinator Tony Elliott said this spring. “But I tell you what, he’s done a great job of being prepared for his opportunity, and he looks like a completely different dude. He’s making all the right reads, he’s making the throws, he looks like he’s in command of the system.”

While Uiagalelei was ranked as the No. 1 pro-style quarterback in the nation coming out of high school, Clemson head coach Dabo Swinney said after the conclusion of spring practice that Phommachanh would be the Tigers’ No. 2 quarterback if the season were to start today.

“He has worked his tail off. He is very smooth and is very fluid,” Swinney said. “He is very knowledgeable. You can tell the game has slowed down. I thought he had a very excellent nine days.”

A highly touted quarterback himself coming out of Avon (Conn.) Old Farms School, Phommachanh was a consensus four-star prospect ranked as the No. 4 dual-threat quarterback in the country. For his high school career, Phommachanh completed 61 percent of his passes for 5,224 yards and 46 touchdowns against 12 interceptions, while also rushing for 1,264 yards and 25 touchdowns.

During his redshirt season at Clemson last year, Phommachanh appeared in three games and completed 6-of-12 passes for 85 yards with 56 yards rushing on 12 carries.

Phommachanh will look to carry the momentum from his strong spring into fall camp and build off of it heading into next season.

“He has a little bit of a different technique. But he is very accurate, and he has big-time arm strength and talent,” Swinney said. “He just looks different. He had a very good spring.” 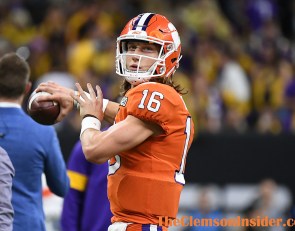