The night prior to its big game at Georgia on September 20, 1986, the Clemson football team did what it does to this day on road trips. First, they had a team meeting, had dinner and then went to a local theater in Athens, Ga., to see a movie.

Often is the case, they are the only team at this particular movie theater. In college football, it is sort of an unwritten rule that the visiting team will go see a movie at one theater and the home team goes to another. Seldom do they meet at the same place, especially in a game where the two teams are bitter rivals.

From 1977-’87, no game in college football was more suspenseful than the Clemson-Georgia series. In those 11 meetings, the two teams battled to a 5-5-1 record. The average margin of victory was 4.7 points per game.

Nine of the 11 games were decided by a touchdown or less. So, there was no sense in antagonizing either team. But when Georgia’s buses pulled up at the same movie theater, as the Tigers were unloading, it was obvious one person was not happy.

“That’s unprecedented. I think that fired Coach (Danny) Ford up,” former Clemson wide receiver Keith Jennings said. “Then that fired the whole team up. We felt that was sort of disrespectful. I’m not sure how many movie theaters Athens had back then, but what are the chances we are getting off the bus and this other bus rolls up behind us and it’s the University of Georgia football team going to the same movie?

“It was a little intense.”

That intensity carried over to game day. In the week leading up to the game, Ford simulated in practice what the game was going to be like.

“Our practices were like games,” Jennings said. “He knew if he hit us a whole lot that week, he would have us prepared for what we were going to see.”

As he stood up in front of the locker room before the Tigers journeyed on to the field at Sanford Stadium, Ford pounded his right fist into his left palm over and over again as he spoke to his players.

“I remember this, and I will not ever forget it,” Jennings said. “He said, ‘If you hit them on every play, there will be a play in the fourth quarter when you will see they will quit.’

“Lo and behold, he was right. They did not want to get hit anymore. And we made plays.”

Clemson did make plays. First it came from the defense. For the most part, the Bulldogs had their way with what was usually a stout Clemson defense. Quarterback James Jackson threw for a career-high 211 yards against the Tigers, including touchdown passes of 32 and 78 yards, while also running 15 yards for another score.

But like their head coach said, the Tigers kept hitting the 14th-ranked Bulldogs and perhaps the biggest play of the game came off one of those hits. With the game tied at 28, Georgia was driving for the go-ahead score late in the fourth quarter when on an option keeper from the Clemson 15, Jackson was stripped of the football and safety A.J. Johnson recovered it on the Clemson nine-yard line.

“We had our chances to win, and it is unfortunate James Jackson fumbled late in the game,” Georgia head coach Vince Dooley said. “But again, give Clemson the credit for making such a big play.”

But the defense’s work was still not done. After a promising drive bogged down at midfield, Georgia got the ball back with 2:06 to play at its own 20-yard line. However, Clemson’s defense rose to the occasion again and forced a three-and-out as two of Jackson’s passes fell harmlessly to the turf.

With the defense finally making stops, it was the offense’s turn to make some plays and those plays came from running back Terrance Flagler and quarterback Rodney Williams. On second-and-11 from his own 35 with just over a minute to play, Flagler took a deep handoff from Williams and bounced outside where wide receivers Ray Williams and Ricardo Hooper held their blocks long enough to allow Flagler to get around the left corner for 16 yards.

On the next play, Williams kept the ball around left end on an option play and rumbled 15 yards to the Georgia 35. The Tigers were just a few yards from being in kicker David Treadwell’s range. 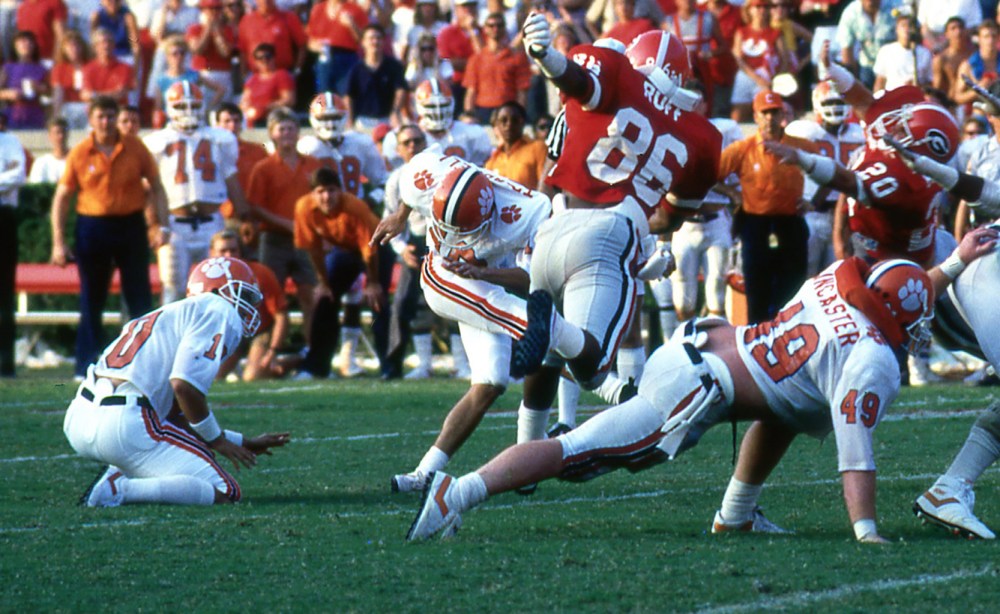 That composure showed on the next two plays as Clemson moved the football five yards closer to the Georgia 29, setting up Treadwell for a possible game-winning kick with four seconds to play.

“We had a little slogan coming down here – ‘I can, I will, I want to,’ and I see a great opportunity,” Ford said.

That want to, that will and that opportunity was staring Treadwell right in the eyes and even though Dooley tried to ice the Clemson kicker by calling a timeout as he lined up for the kick, nothing was going to keep him from winning the game.

After he lined up his spot from the left hash mark, the kicker, who became known as “Mr. Clutch” at Clemson, nailed the 46-yard attempt as time expired for a 31-28 victory. For a few seconds Treadwell just watched the football as it sailed through the uprights, and then one of the most memorable celebrations in Clemson history occurred as holder Todd Schonhar lifted Treadwell in the air from behind with his legs kicking while their Clemson teammates dog piled the both of them.

“I hit it well, and it felt good,” Treadwell said. “We talked all week about desire, and I said, ‘I will make this field goal.’”

The Tigers’ desire to win was evident all afternoon in Athens that day. They overcame five turnovers, a missed field goal, an injury to star tailback Kenney Flowers and a record-setting performance from Georgia’s quarterback.

Yet, like their head coach predicted in their locker room just moments before the game started, if they continue to play hard and hit Georgia over and over again, they will make the plays that will win the game.

“He looked over at Treadwell and he told him he was going to ‘make the winning field goal today.’ And lo and behold, he did it,” Jennings said.