With John Swofford announcing his retirement Thursday afternoon, the clock started to tick on who will be his replacement.

Swofford announced the 2020-21 athletic year will be the last of his 24 years of service as the Atlantic Coast Conference Commissioner. He said he will continue in the commissioner’s chair until his successor is installed and will assist with the transition as needed.

Who are the candidates to replace Swofford? It could be somebody from Clemson.

Both Clemson University President Jim Clements and athletic director Dan Radakovich are being mentioned as possible successors for Swofford.

“I mentioned (Clements) in my speculative story. Others have mentioned him,” longtime ACC writer David Teel said on the Packer & Durham Show Friday on the ACC Network. “[Mark Packer], you know the lay of the land at Clemson far better than I. That is your alma mater, but he is very involved in athletics. He seems to have an affection for the ACC. We will see how it all plays out.

“If Jim Clements is not involved there is no active athletic director in the league who has been in the league longer than Dan Radakovich at Clemson, who previously was the AD at Georgia Tech.”

Under Clements’ leadership, Clemson has raised the bar in admissions, enrollment, research, athletics, graduation and retention rates, and fundraising, including the successful completion of the $1 billion “Will to Lead” capital campaign. In addition, the campus is currently undergoing the largest construction boom in the history of the university. 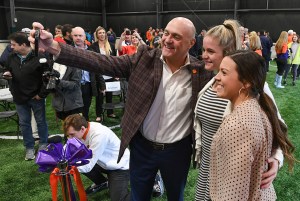 Clements, who has been at Clemson since Dec. 31, 2013, is a nationally recognized leader in higher education who has served as president of a university in three different athletic conferences – the Big East, the Big 12, and the ACC – where he also served as the 2016- ’17 chair of the ACC Council of Presidents.

Before he came to Clemson, Clements served as the president of West Virginia University for nearly five years. During that time, WVU set significant records in private fundraising, enrollment, academic rankings and research funding.

Radakovich, who started at Clemson on Dec. 1, 2012, has continuously led the Tiger athletic department to high achievements, both on the field and in the classroom, while developing significant upgrades in finance and facilities. Since his arrival, Radakovich has led Clemson athletics to a period of sustained success a growth, considered among the greatest stretches in school history.

Most recently, the department set a record 3.09 GPA in the fall of 2019, while seeing the football program play for the national title for a fifth time, the men’s soccer program finish in the top ten, and the women’s soccer program advancing to a sixth-straight NCAA Tournament. Additionally, Radakovich oversaw the development of the softball program at Clemson, which officially began in the spring of 2020.

Radakovich’s tenure has been highlighted by the success of the football program, which has claimed the 2016 and 20188 National Championships. The Tigers have won five consecutive ACC titles, and made five straight College Football Playoffs.

The highlight of the 2018-19 academic year was a second football national championship in three years, as Clemson beat Alabama, 44-16, in the 2019 National Championship game in Santa Clara, Calif. During the 2017-18 academic year, Clemson became the first school in history to reach the College Football Playoff, advance to the Sweet 16 of the men’s basketball NCAA Tournament and host a baseball regional.

The Clemson athletic department set a new school record for the highest score in the NCAA’s graduation success rate at 92 percent while a school-record seven programs were recognized by the NCAA for outstanding APR. Clemson has been at 91 percent or higher for seven-straight years.

Radakovich also served on the CFP Committee for three years. He came to Clemson from Georgia Tech, where he served with distinction for six years (2006-’12).

The ACC has a history of putting its own in the commissioner’s chair. Jim Weaver was the athletic director at Wake Forest when he was the first commissioner. Bob James, who followed him, while coming from the Big 8 and the MAC, had been a student-athlete at the University of Maryland. Gene Corrigan was a Duke graduate who coached at Duke and later was the athletic director at Virginia.

Swofford was a football player at North Carolina, worked with Corrigan at Virginia and was the athletic director in Chapel Hill before taking over as the ACC Commissioner in 1997.

“I think it could [go outside the conference], but that is not to say that there is some girth of candidates who have those ACC ties,” said Teel, who covers the ACC for the Richmond Times-Dispatch in Richmond, Va. “You look at Michael Kelly, who worked for Commissioner Swofford at the ACC then went to the College Football Playoff and is now the athletic director at South Florida. Bernadette V. McGlade, who is the commissioner of the Atlantic 10, she worked under Commissioner Swofford. Shane Lyons, the athletic director at West Virginia. We can go on, but there are plenty of folks around the country that have deep ACC connections.”