It’s Skalski’s, Jones’ turn to step up at linebacker

It’s Skalski’s, Jones’ turn to step up at linebacker

When comparing last year’s depth chart heading into the 2019 season with what Clemson has this year, it’s easy to see there is not much of a drop off, or any at all, in terms of talent and potential production in 2020.

This fall, the Tigers return 11 combined starters on offense and defense, plus its starting kicker and punter from a year ago, along with plenty of talented and experienced depth. Again, they are in perfect position to win the ACC and contend for another berth in the College Football Playoff.

Heading into the 2019 season, Clemson had to replace linebackers Kendall Joseph and Tre Lamar. Lamar was ranked second on the team in tackles and Joseph was third. However, they returned all-everything linebacker Isaiah Simmons, who defensive coordinator Brent Venables built his entire defensive around.

James Skalski, who had a lot of experience, was coming off a redshirt season after an injury in fall camp the previous year held him out for a good part of the 2018 season. Chad Smith, a veteran reserve the previous three years, filled the void at the third linebacker spot. But depth was an issue all year, as the Tigers were young and inexperienced behind Simmons, Skalski and Smith.

Heading into this season, Clemson again must replace two starters at linebacker. Smith used up his eligibility while Simmons took off to the NFL after one of the greatest individual seasons anyone has seen in college football by a defensive player.

The Tigers do welcome back Skalski at middle linebacker. In his first year as a full-time starter, Skalski did not disappoint. He started all 15 games and finished second on the team with 105 tackles, including 7.5 for loss and 4.5 sacks, while also recording four pass breakups, a forced fumble, and a fumble recovery.

The senior can also play weakside backer and can run the defense from either position.

“I think I’ve just got to be an extension of Coach V, really,” Skalski said. “Me and Nolan [Turner] are the oldest two guys now on the defense. I’ve got to know it like the back of my hand. I just need to be an extension of Coach V on the field. Because I can always get better and do stuff for myself. But I think what makes a great middle linebacker is making everything around him better, too, and that’s something I’ve been trying to focus on, just know everyone’s job, get everyone on the same page so we can all play good team defense.”

Jakes Venables and Kane Patterson, both redshirt sophomores, will backup Skalski in the middle. 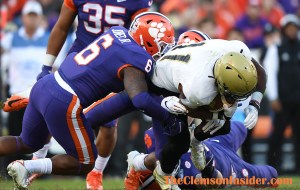 Mike Jones, a reserve last year, will take over for Simmons on the strong side of the defense. Jones redshirted in 2018 and last year backed up Clemson’s All-American linebacker.

In his two plus years at Clemson, including a redshirt season in 2018, Jones has 22 career tackles, a forced fumble and a pass broken up. He played in three games in 2018 before being redshirted.

“It’s not really too often, especially linebackers, who just jump into it and then you’re great. It takes years of hard work and patience and just grinding and straining yourself,” he said. “When you go through every day, when it gets tough, you look at those guys and be like, they did it too, it’s okay, keep working and it’s all going to work out.”

Competition is wide open at weakside linebacker. Redshirt junior Baylon Spector should be the frontrunner and will get the opportunity to start with the first-team defense. However, redshirt freshmen Keith Maguire and LaVonta Bentley will also get their opportunities to show what they can do.

Sergio Allen, who enrolled in school this past January, will also be in the mix on the weakside. Maguire and Allen will also compete for playing time on the strongside as well.

Spector recorded the first two sacks of his career in the Tigers’ Fiesta Bowl win over Ohio State last December. In the 30 games he has played in, he has recorded 53 tackles, including seven tackles for loss. He has also forced a fumble and recovered two of them.

Brent Venables has said many times Spector reminds him of Ben Boulware due to his instincts and his fearless attitude. As a backup in 2019, he tallied 45 tackles, including six for loss and two sacks, while playing in all 15 games.