Though head coach Dabo Swinney will not admit it

Dabo Swinney sat at the podium at the San Jose Marriott and chuckled.

Little ole Clemson did something that night on January 7, 2019, not many thought they could do. They beat an undefeated Alabama team for a second time to win a national championship, except this time they did not need a last-second touchdown pass to win the game.

The Tigers “dominated” Alabama in every sense of the word, beating the team everyone before the game called “the best ever,” 44-16. It is still the worse loss by a Nick Saban coached Alabama team in his 13 seasons there.

“We beat Notre Dame and Alabama and we left no doubt,” Swinney continued, “and we walk off the field tonight as the first 15-0 team in college football history. All the credit and all the glory goes to the good Lord, number one. And number two, these young people.

“When you get a group of young people to believe, and are passionate and they love each other, they have sacrificed, they are committed to one purpose … you better look out, great things can happen. That is what you saw tonight.”

What everyone at Levi’s Stadium in Santa Clara, Calif., witnessed, and those millions watching on television, was the introduction of a new dynasty in college football, one that has been in the making since 2011, when Swinney slowly started building his culture following the program’s first ACC Championship in two decades.

But when asked about the possibility of a dynasty, Swinney chuckled, and then ever so modestly rejected the notion that Little Ole Clemson could be in the midst of one of the greatest runs in the history of the sport.

“No, we’re a long way from a dynasty. We’re a great program. There’s no doubt about that.”

Though Swinney does not believe his program is a dynasty, the numbers don’t lie.

Clemson is the first program in the history of the ACC to win two national championships in a four-year span. The last two senior classes went 55-4 overall, tied for the best record in the history of college football. 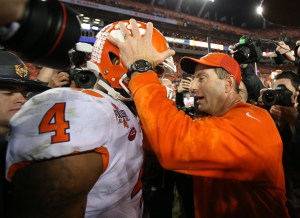 In 2018, Clemson won 13 games by at least 20 points. Of those 13 wins, two were by 60-plus points, the first team in ACC history to have two 60-plus point victories in the same season. Two other wins were by 41 points or more, while three were by 31 or more points. Six other victories were by 20-plus points, including a 27-point win over an undefeated Notre Dame team in the Cotton Bowl and then the 28-point beatdown they handed Alabama in the national championship game. The Tigers were the second team in the history of college football, and the first in 30 years, to win back-to-back games against undefeated teams to win a national championship.

The Tigers carried the momentum from the 2018 season into 2019. Clemson extended its win streak to 29 games, tying Florida State [2012-’14] with the longest winning streak in ACC history. Eleven of Clemson’s 14 wins in 2019 were by 31 or more points. It won an NCAA record eight straight games by at least 31 points.

And though they ultimately lost in the national championship game to LSU, the Tigers have played in four of the last five title games. Clemson and Alabama are the only two programs in the history of the BCS and College Football Playoff era to play for four national championships in five years.

In his 12 seasons as the head coach, 11 fulltime, Swinney has posted a 130-31 record at Clemson. His last nine teams have won at least 10 games every year. His teams have also won eight division titles, six ACC Championships, including five straight outright, a first in ACC history.

“We’re incredibly consistent in every area of our program. I mean, and that’s what I’m more proud of than anything is just the consistency,” Swinney said. “One of the things we talked about… over the last decade, everything we’ve done once, we’ve done multiple times, and it’s kind of been a progression.

Besides Alabama, Clemson is the only program in the country with nine straight 10-win seasons and joined Alabama and Ohio State as the only schools with 100 or more wins this past decade.

“It’s just been kind of a progression for us. We’ve just kind of kept our head down over the last decade and gone about our business,” Swinney said. “We’re certainly – I think we’re as good a program as there is out there, but we’re a long way from a dynasty.

“I think from a dynasty standpoint, Alabama is kind of in a category of their own. I mean, Coach Saban has won five National Championships in 10 years, or however long he’s been there. It’s incredible the run that they’ve had. But we’re just thankful that we got the opportunity to experience it.”

Former defensive end Clelin Ferrell, who now plays with the NFL’s Las Vegas Raiders, says it is not going to end here.

“He had a vision for this program and that vision is still formulating. This is not the pinnacle. He will tell you right now that this is not the pinnacle… It is just crazy because he always wants more, and he wants the best for us. It is not about what the players want. It is about what the players need and what this program needs, and he does it the right way. He is always about putting God first and that is what I love about him. He has always made Him the head of his vision, so I love that man to death.”

And so does little ole Clemson. A school and town that houses the best little dynasty in college football.