Matthews (N.C.) Weddington five-star all-purpose back Will Shipley is loving life as a Clemson commitment even more than he thought he would.

Shipley, a consensus top-50 national prospect, joined Dabo Swinney’s 2021 class on May 5 and has since felt relief from the burden the recruiting process can bring as he finally gets to enjoy being somewhat of a regular high school kid.

“It’s honestly a lot better than I even thought it was going to be, and my expectations were very high,” Shipley said to The Clemson Insider. “It’s absolutely just blown them out the water. So much weight is put off my shoulders. I’ve been able to finally just be a high schooler and enjoy my life, get to spend a lot more time with my family, friends, not have to worry about taking a call at 12, 2, 4 and 6. It seems like that. I’ve just really been able to enjoy my life and kind of be a normal high schooler.”

Shipley is one of the headliners of Clemson’s 2021 class that features eight top-100 prospects according to the 247Sports Composite rankings and is currently ranked as the No. 2 class in the country behind Ohio State, which has four more commitments right now.

Although the Tigers are second to the Buckeyes on paper, Shipley believes he is part of the nation’s best class in actuality.

“It’s looking absolutely great,” he said. “Obviously number two, can’t complain with that, and that’s off of all the recruiting sites. I think there’s no doubt in my mind that off paper we are the number one class in the nation with the guys we have — just the people they are, the football players that they are — and we’re not done yet. Obviously we’re taking a smaller class this year, but I think the guys that are on the table, the guys that we think we can get, will just make this class that much better.”

While the majority of Clemson’s class is in place, the Tigers are still pursuing a select group of top prospects to fill the final available spots, and Shipley is working hard to do what he can to help his future squad add more of the country’s finest talent.

“Couple offensive tackles — (Nolan) Rucci, Tristan Leigh, obviously Amarius Mims as well,” Shipley listed when asked who he is trying to recruit. “Not too sure about that one (Mims). I think he’s a big SEC guy but still talking to him every once in a while. On the defensive side of the ball, we’ve got Payton Page, just trying to fill up that D-tackle spot. A couple of cornerbacks — Nyland Green is someone I’ve been talking to pretty frequently. Just trying to fill in some of those spots that we’re missing right now. We’ve got some really big-time recruits. Just trying to fill in piece by piece and complete the puzzle.”

Shipley likes Clemson’s chances of landing some of the aforementioned recruits, knowing firsthand how difficult the program, with all of its championship pedigree and appeal, is to turn down.

“I feel great. I really do feel good,” he said. “It’s just so hard to say no to a place like Clemson. The culture, everything we have, everything we have to offer — it’s hard to decline, and from everyone I’ve talked to, they’ve kind of had the same mindset. Obviously there are so many other great programs out there that are going to recruit against us, but they can’t have national championships and a culture like we do. So, I think with our portfolio and the type of guys that we’re recruiting, that’s what they love, a place like Clemson.” 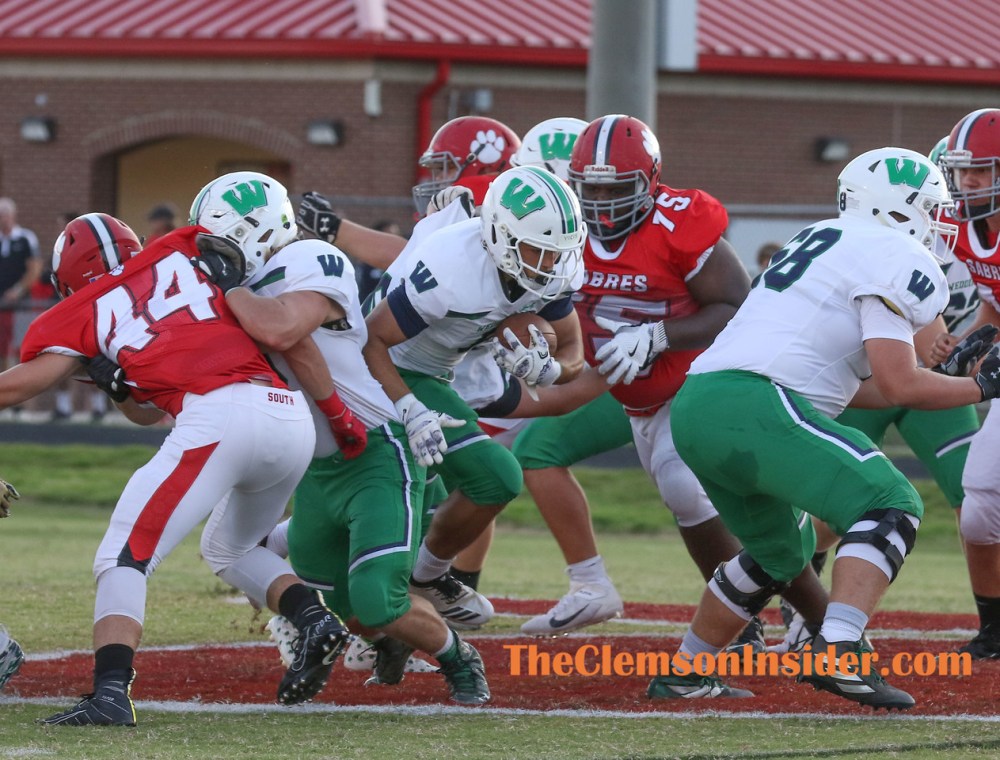 Meanwhile, away from the recruiting side of things, Shipley is getting ready for his final season of high school football. On Monday, he began offseason conditioning with his Weddington team after a long layoff due to the COVID-19 pandemic.

“We’ve got five or six pods, two different time periods, one from 8:30 to 10, the other from 10:30-12,” Shipley said of the staggered workout times. “But just being back out there with the position group, it’s really great seeing the guys, getting some social interaction, seeing the excitement that everyone has. It’s really good to be back out there.”

As a junior in 2019, Shipley led Weddington to a 16-0 record and its second straight 3AA state championship. He was named the 2019 Gatorade North Carolina Football Player of the Year after rushing for 2,040 yards and 30 touchdowns to go with 582 receiving yards and eight more scores through the air.

Heading into his senior season, Shipley has his sights set on improving one specific part of his game and quieting some critics in the process.

“Kind of the same thing as my offseason goal, was really focusing on lateral quickness, being able to accelerate out of lateral cuts,” he said. “In tight spaces, making people miss more often rather than just running by them, and that’s one of the big critiques that I get is ‘he won’t be able to run by people like he does at the high school level at the college level.’ So, one thing I really wanted to work on was being able to make people miss and kind of just proving the doubters wrong.”

Shipley plans to enroll early at Clemson in January and looks forward to the next chapter of his life, though he first wants to close the book on his high school career by helping Weddington three-peat as state champs.

“I’m excited,” he said. “Obviously high school comes first, senior year, finishing off with a state championship, God willing everything goes the way that it’s supposed to. But I’m excited to be a Tiger, there’s no question about that. I’m excited to get out there, compete, just get better every single day and hopefully be able to put on for everyone back in my town that believed in me from the beginning — kind of just put Weddington on the map and win some national championships.”

Clemson head coach Dabo Swinney met with the media after practice on Wednesday, as the top-ranked Tigers get set to host Syracuse this Saturday at Death Valley. Swinney updated the health status of (…)

Clemson’s defense has shut down its last two opponents, Miami and Georgia Tech, with ease. The top-ranked Tigers shut down the Yellow Jackets on Saturday in a 73-7 beatdown in Atlanta. Clemson held its (…)

Powdersville High School’s Jalen Rambert is one of the top sophomore prospects in the Palmetto State and one of the most highly regarded linebackers in the class of 2023. The 6-foot-2, 240-pounder is also (…)