Who is the next out-of-nowhere star for Clemson?

Who is the next out-of-nowhere star for Clemson?

On Tuesday, former Clemson star Isaiah Simmons reportedly signed a $20.66 million deal that is fully guaranteed for four years. The Arizona Cardinals’ first-round pick from the 2020 NFL Draft gets a signing bonus of $12.58 million.

That is not bad for a guy no one, outside of Clemson, had ever heard about two years ago.

Simmons’ career took off at Clemson during the Tigers’ national championship run in 2018. That is when he took over for Dorian O’Daniel at the SAM linebacker spot for defensive coordinator Brent Venables. Few people knew about Simmons, a former three-star recruit from Olathe, Kan.

Clemson got in the game late for Simmons, who at the time appeared headed to Michigan. The Tigers found themselves in a desperate situation at safety in 2016 when starters T.J. Green and Jayron Kearse both darted off to the NFL a year earlier than expected.

When Clemson offered, Simmons was all in and signed to play for the Tigers. He was redshirted in 2016 before playing in 2017 as a backup safety and linebacker. Simmons started showing glimpses of how special he could be even then.

Of course, the rest is history. Simmons went on to be one of the greatest players Clemson has ever had, while becoming a unanimous All-American, earning ACC Defensive Player of Year honors and winning the Butkus Award as the nation’s best linebacker. 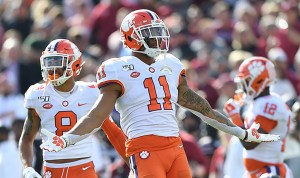 Few people outside of Clemson knew about future All-American Isaiah Simmons prior to the 2018 football season. (Bart Boatwright/The Clemson Insider)

Who is next? Who is Clemson’s next Isaiah Simmons? Who is the guy no one outside of Clemson knows about that the Tigers need to step up and become an All-American in order for Clemson to keep contending for national championships?

In my opinion, I think the likely candidate is Braden Galloway.

Like Simmons, Galloway was a three-star prospect recruited right down the road in Seneca. Like Simmons, he is freakishly athletic and can do many different things.

Galloway played quarterback at Seneca, but he also played tight end. Also, like Simmons, he can move extremely fast for a guy who is 6-foot-4 and weighs 240 pounds. Clemson signed Galloway in 2018 as a tight end and in his first two years he has shown signs of how good he can really be.

Swinney and tight ends coach Danny Pearman have compared Galloway to former All-American Jordan Leggett, who holds many of the school’s records for a tight end. The two are built very similar and the Tigers are hoping Galloway can become the threat Leggett was in the passing game when he helped Clemson win the 2016 national championship.

As Galloway showed in the national championship game against LSU, he can be a mismatch problem for a college safety and a linebacker. He finished the game with two receptions for 60 yards, including a 43-yard catch-and-run. Also, Galloway can lineup in more traditional tight end sets and block, as he showed in the Tigers’ win over Ohio State in the Fiesta Bowl.

Galloway has all the tools to be the next big star at Clemson. The question is can he use those tools to produce. We shall see.