No one has worn No. 1 at Clemson better than Dantzler

No one has worn No. 1 at Clemson better than Dantzler

Through the years, Clemson Football has had countless All-Americans and All-Conference players to help it become one of college football’s best programs.

With that said, who wore their number the best. Clemson has retired just three numbers it is proud history. Steve Fuller’s No. 4, C.J. Spiller’s No. 28 and Banks McFadden’s No. 66. However, the Tigers have had many decorated players wear those numbers and more.

So, who wore what number the best? We begin this list with No. 1 of course.

Through the years many former Tigers have worn the No. 1 jersey, but it has been in the last 20 years when the number was represented the best. Of course, there is former running back James Davis, who was the ACC Rookie of the Year in 2005 and was a two-time First-Team All-ACC selection in 2006 and ‘07.

There was former wide receiver Airese Currie, who was a First-Team All-Selection in 2004, while more recently Trayvon Mullen was an All-ACC cornerback and second-round draft pick in the 2019 NFL Draft.

However, the guy who perhaps wore No. 1 the best at Clemson was no other than Woodrow Dantzler. The 2001 All-ACC First-Team quarterback was special and is still perhaps the most entertaining player to ever play at Clemson.

Dantzler did things that defied logic when he played at Clemson from 1998-2001, as he danced and weaved his way in and out of traffic with one spectacular play after another. His Hail Mary run as time expired at Georgia Tech in 2001. His unbelievable 517 total yards and six touchdowns at NC State the following week.

He captivated Clemson fans every week with his style of play and his escape-ability. With Dantzler at quarterback you never left to go to the bathroom or get concessions because you likely would miss something special if you did.

His nine 100-yard career rushing games is still the most by a Clemson quarterback. But Dantzler was more than just a runner, he could also throw the football.

Dantzler had 13 games in which he threw the football for 200 or more yards, tied for fourth in Clemson history. It was a school record at the time of his graduation.

The Orangeburg, S.C., native was the first quarterback in FBS history to throw for 2,000 yards and rush for 1,000 yards in the same season, which he officially did in 2001. He also did it in 2000, but he went over 1,000 yards rushing in the Tigers’ bowl game, which the NCAA did not officially keep at the time.

Dantzler was a Heisman Trophy candidate during his career, as he set all sorts of Clemson records for a single-game, season and career. He is best remembered for his back-to-back games in 2001 against Georgia Tech and NC State.

He had 418 total yards in a win at Georgia Tech when he threw for more than 254 yards and rushed for 164, while scoring the game-winning touchdown in overtime.

The next week, he totaled a then Clemson record 517 yards, breaking his own record from the previous week, in a win over NC State. He also had six total touchdowns in the game, while rushing for 184 yards and throwing for 333. The 517 total yards still ranks third all-time in Clemson history for a game.

Dantzler not only wore the No. 1 jersey the best in Clemson history, he also redefined the quarterback position in Tigertown. 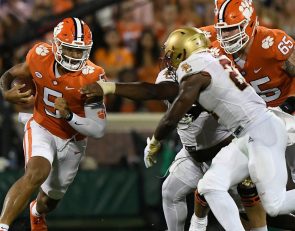