Speaking to the media Thursday evening following Clemson’s first practice of fall camp, head coach Dabo Swinney was asked for his thoughts on players from the Pac-12 and Big Ten recently expressing their concerns and demands designed to protect and benefit them amid the COVID-19 pandemic and racial injustice, among other issues.

This week, contingents of players from the two conferences released lists of demands they want implemented by their respective conferences and the NCAA, and the Pac-12 players went as far to threaten boycotting practices and games unless their requests are met.

Similar to the Big Ten’s set of mandates, the Pac-12’s demands include health and safety protections, the elimination of what the players described as excessive salaries, an end to racial injustice in sports and society, guaranteed medical coverage, and a profit-sharing arrangement in which 50 percent of each sport’s conference revenue would be distributed evenly among athletes.

Swinney thinks the majority of demands are fair and believes it is a good thing these topics and issues are being brought up and discussed, and said he always encourages his own players to speak up whenever they feel the need to be heard.

“Our players have had a voice,” Swinney said. “That’s probably the first thing I did, was give our players a voice and empower them to help be a huge part of our program. We’ve done that from the first time I became coach.

“But as far as specific things that were out there, I saw a little bit of it. What I did see, most of it, to me, was pretty common sense and some reasonable things. Even like the six-year guarantee — those are things we’ve been doing around here for forever. I’ve had 50-year-olds come back to Clemson and graduate. We’re way more committed to six years to our guys getting their degrees, and have been for a long time. So, there’s some great things. Talking about some of the revenue stuff, I’ve always been for these guys getting some type of lump sum — I’ve just always wanted to tie it to graduation. So, always good when you have good conversation. But as far as my guys, man, they always have had a voice.”

Swinney mentioned the layers of communication the Tigers have within their program, from their leadership group to the Swinney Council to Paw Journey ambassadors, and says it’s one of the core reasons they have been so consistent and successful over a long period of time.

“When you have great communication, you have trust and respect and everybody knows what our vision and common purpose here and what we’re trying to do, and that leads to appreciation,” Swinney said. “We have a great appreciation for each other and everybody’s role, and we always have. But as far as getting ready for camp, we’ve tried to make it as normal as we can. Our guys have always been a part of it. I always consult with them. I do a 13-month calendar every year, and we always communicate that to the players. So, no different from that regard.” 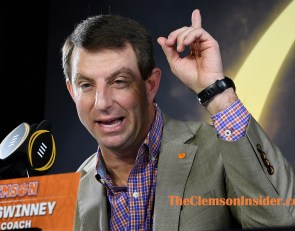