Clemson offensive coordinator and running backs coach Tony Elliott is glad the Tigers’ lopsided 37-13 win at Wake Forest last Saturday afforded them the opportunity to get a lot of young players into the game — including true freshmen running backs Demarkcus Bowman and Kobe Pace — and Elliott knows the reps they received gives them and him something to build off of moving forward.

“It was good for those guys to get some meaningful experience because again, in this climate, this day and age, they’re going to be guys we’re going to have to count on at any given moment down the stretch,” Elliott said Monday during his weekly meeting with the media. “So, it was good to see those guys. I’m sure there’s a lot of things that I’ll be able to coach up, but them having some success and getting the opportunity to taste the field is going to be good and give me the opportunity to keep pushing those guys.”

Both Bowman and Pace rushed for exactly 22 yards on six attempts in their first college game. Pace was on the field for 15 snaps, with his longest run going for 16 yards, while Bowman logged six snaps and recorded a 10-yard run as his longest carry.

Toward the end of the third quarter, Pace burst right up the middle for his 16-yard run on third-and-2 from the Wake Forest 19-yard line. He had a chance to score on the ensuing play from the 3-yard line but was stopped short of the end zone after being met by a pair of tacklers.

“It was good to see both of them,” Elliott said of Pace and Bowman. “I thought Kobe was going to punch one in down there as close as he got, but you’re able to see that he’s got a ton of ability. A guy that probably may have gotten overshadowed a little bit in the recruiting process, but very pleased with him. Good to see him get in there in live action. I thought he handled it a little bit better, just from being able to get lined up on his own. But Demarkcus is a guy that once you turn the lights on and you put the ball in his hands, he was close to breaking some long ones.”

Clemson starting running back Travis Etienne, who rushed for a game-high 102 yards on 17 carries and had a rushing touchdown, said after the game he liked what he saw from the talented duo of freshmen backs.

“Kobe really shocked me — well, I wouldn’t say really shocked me because he’s been doing that in practice,” Etienne said. “But he had a great run. He was just very physical, running through arm tackles. I wanted to see him get in the box but he didn’t, but that’s a challenge for next week to get in the end zone.

“And Bowman, he just flashes what you see in him — just him being able to be that outside runner, him getting to that outside and how dangerous he can be out there.”

Etienne believes the future for Bowman and Pace is as bright as they want it to be so long as they continue to stay “All In” and take advantage of the resources available to them. 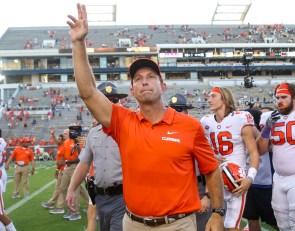 Cornell Powell is not surprised by what he is doing on the field or how well he has played in recent weeks. Clemson’s wide receiver has put in years of hard work to get to this point and stayed patient (…) 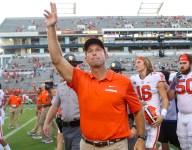 Dabo Swinney said he was as surprised as anyone when he walked off the practice field Tuesday evening and learned Clemson’s game against Florida State was officially canceled by the ACC, and tonight’s game (…)

LaVonta Bentley had the best game of his young career at Clemson last Saturday in the third-ranked Tigers’ 52-17 victory over Pittsburgh. On Senior Day at Death Valley, it was the redshirt freshman linebacker (…)

TCI Game Day and Predictions: No. 3 Clemson at Virginia Tech

It is Game Day in Blacksburg where the Tigers look to continue the road to Miami and another national championship.  No. 3 Clemson battles Virginia Tech with a trip to the ACC Championship on the line. (…)