Spring Hill (Tenn.) Summit four-star edge rusher Keaten Wade has been hearing from college coaches every day since they were allowed to begin reaching out to high school junior prospects in the class of 2022 on Sept. 1, per NCAA rules.

“It’s been crazy amounts of love and interest,” Wade told The Clemson Insider. “And daily contact from coaches.”

Wade (6-4, 215) named Kentucky and Arizona State as two of the schools he has been in frequent contact with, but coaches from plenty of other programs have been buzzing his phone on a regular basis since the beginning of this month.

“All the coaches are contacting me,” he said. “Hard to tell which ones are (in contact) the most, though.”

One of the coaches Wade has been communicating with is Clemson defensive ends coach Lemanski Hall, Wade’s area recruiter for the Tigers.

Wade — a versatile defender off the edge who can get after the passer as a defensive end or an outside linebacker — has impressed Hall with his film and remains under evaluation for a potential offer from Clemson.

“Coach Hall recruits me,” Wade said. “I’m one of the guys he’s still evaluating. We talk from time to time every month.”

Wade is highly interested in Clemson’s program for several reasons, including how the Tigers aren’t hesitant to play a lot of true freshmen and give them the chance to contribute early in their careers.

“What stands out to me is their culture and winning standard,” Wade said. “The genuineness of Coach Hall. Just the overall control on the program to be great. And young recruits getting in like Bryan (Bresee) and others. Anybody can make an impact.”

Wade, who has more than a dozen scholarship offers — including offers from Arizona State, Baylor, Kentucky, LSU, Mississippi State, Oklahoma, Ole Miss, Penn State, South Carolina, Tennessee, Texas A&M and others — is still a ways away from making his college decision.

Wade is the third-best prospect from the state of Tennessee, No. 14 outside linebacker nationally and No. 154 overall prospect in the 2022 class according to the 247Sports Composite rankings.

As a sophomore last season, Wade tallied 103 total tackles, 22.5 tackles for loss, 11.5 sacks, one forced fumble and two fumble recovers. He also saw plenty of action on offense, rushing for 1,152 yards and 15 touchdowns (7.0 yards per carry) while also catching 14 passes for 172 yards and a couple more scores. 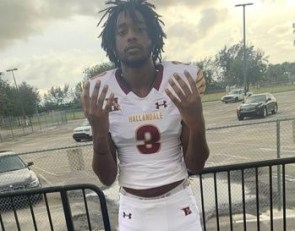