Swinney thought he was in trouble last night

Swinney thought he was in trouble last night

For a second on early Tuesday morning, Dabo Swinney thought he was in trouble.

Around 12:30 a.m., Swinney’s wife, Kathleen, rolled over in bed and gave the Clemson head coach a kiss on the cheek and said, “Happy Anniversary.”

“I did not really know what she was talking about,” Swinney said. “I panicked for a second. It was an out of body experience there. Then I realized it was October 13, so that was pretty cool.”

October 13 of course is not just any normal day for the Clemson head coach. It is the day he was named the interim head coach at Clemson in 2008, replacing Tommy Bowden who stepped down that morning following a loss to Wake Forest the previous Thursday night.

Eight weeks later, Swinney had the interim tag removed from his head coach title and since then Clemson has grown into one of the elite college football programs in the country.

“When I woke up this morning, I obviously knew that today, about right now (11:20 a.m.) I was in Terry Don’s (Phillips) office, as a matter of fact, trying to chart out the next seven weeks and figure it out,” Swinney said. 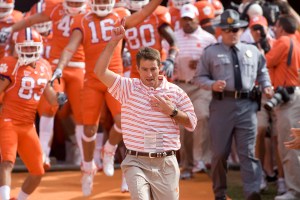 Clemson head coach Dabo Swinney runs down the hill prior to his first game as the head coach against the Georgia Tech Yellow Jackets on October 18, 2008 (File Photo/Rex Brown)

Coincidentally, the Tigers were playing Georgia Tech that Saturday, the same team the top-ranked team in the country will play this Saturday at Bobby Dodd Stadium in Atlanta. Of course, Clemson lost that game in 2008, something Swinney hopes they can avoid this time around.

“Hopefully, we can get a different result twelve years later,” he said. “Yeah, it is amazing. It is hard to believe. Time flies. It is incredible. It is cool for me because I have a bunch of guys on my staff now—C.J. Spiller, Miquel (Chavis), (Tyler) Grisham. There are a lot of guys on this team now—(Xavier) Brewer—that were here—Rashard Hall, DMac (DeAndre McDaniel), a lot of these guys were here and playing and it is really cool to have these guys around. A bunch of those guys texted me this morning, as well.”

In his 12 years at Clemson, Swinney has become one of college football’s best coaches, producing a 134-31 record. He has led the Tigers to two national championships, five trips to the College Football Playoff, two national runner-up finishes and six ACC Championships.

Clemson has won at least 10 games every year since 2011, the second longest active streak in college football and tied for the third longest in history.

“So, it is pretty cool. We have come a long way. We should have bet on my over. That is probably what we should have done back then,” Swinney said.