It is crazy to think about it now, but there was a time when some people thought Dabo Swinney was making a mistake when he benched Kelly Bryant for Trevor Lawrence following Clemson’s win at Georgia Tech in 2018.

Lawrence was phenomenal coming off the bench and sparking the Clemson offense the last time the Tigers made the trip to Atlanta, the site of Saturday’s game between No. 1 Clemson and the Yellow Jackets.

“He made one play in particular moving to his left. He threw an absolute rope to Hunter Renfrow. And then what he did the rest of the day was impressive,” Swinney recalled.

Bryant on the other hand, struggled. The Clemson offense managed just 13 yards and one first down prior to Lawrence coming into the game. He finished the day just 6-of-10 for 56 yards, while running four times for five yards.

Though Bryant was 16-2 as a starter and led the Tigers to the College Football Playoff the year before, Swinney knew it was time to give his talented freshman a chance.

“You just know when you know,” the Clemson head coach said.

But there were some that questioned Swinney’s decision. ESPN sideline reporter Maria Taylor was very outspoken about Bryant being benched in favor of Lawrence. She felt Swinney was making a mistake going with the freshman and that it would cost Clemson in the end.

Taylor’s colleagues at ESPN—Desmond Howard and David Pollack—also wondered if Swinney made the right decision, though they were not as outspoken about it as Taylor was.

However, no one was more outspoken than Bryant, who left the team the following Tuesday, becoming one of the first high profile players to enter what has now become known as the transfer portal.

The next day, Bryant told The Greenville News he felt he did not get a fair shake in his competition with Lawrence to be the Tigers’ starting quarterback, and he felt like he got slapped in the face for all he had done. 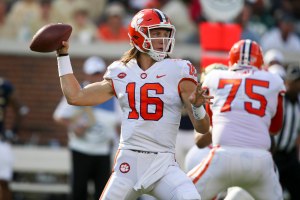 Clemson quarterback Trevor Lawrence (16) throws a pass against Georgia Tech in the first half at Bobby Dodd Stadium. Lawrence went on to finish the afternoon 13-of-18 for 176 yards and four touchdowns in leading the Tigers to a 49-21 victory on September 22, 2018. (Photo by Brett Davis/USA TODAY Sports)

Bryant started the first four games for Clemson in 2018 and deserves credit for the Tigers’ win at Texas A&M back in Week 2. However, Lawrence started to turn the corner by Week 3 of the season and then after the performance he put together in beating the Yellow Jackets, it was obvious to Swinney he was the man for the job.

“He is just an amazing player, and this is a game of competition and performance,” Swinney said. “I love all of my players, but he was clearly the best guy and what he has done since then is incredible. It is just incredible.”

Lawrence went on to an 11-0 record as a starter in 2018. His strong arm and accuracy on the deep ball, allowed Clemson the ability to stretch the field, once again, with its talented receivers, while opening up the running game for Travis Etienne and the offensive line. It also took pressure off of its talented defense.

After surveying Syracuse in Week 5, thanks to Chase Brice coming off the bench for an injured Lawrence and Etienne rushing for 207 yards, the Tigers went on to win the rest of their games by 20 or more points, including a 44-16 victory over Alabama in the CFP National Championship Game.

Clemson is 29-1 with the Cartersville, Ga., native behind center.

“He is such a great young man and person. He is a great human being. He is so coachable. He loves to prepare. He loves the grind. He loves the whole process of being a football player and getting better,” Swinney said. “Whether it be developing his body, developing his mind, his footwork, his pocket presence, you name it. He is fanatical about all of those things. He is always self-scouting himself.”

And now looking back two years later, it was obvious, Lawrence was the right man for the job.