Top-ranked Clemson looked uninspired in the first half against Syracuse and entered halftime with a slim 24-14 lead. It’s lackluster performance to start the game showed on the stat sheet.

The Tigers played a sluggish half and amassed 310 yards of total offense and allowed 127 yards. But an interception, blocked punt and missed field goal highlighted a mistake ridden 30 minutes for Clemson.

Quarterback Trevor Lawrence completed 20-of-32 passes for 203 yards, two touchdowns and an interception. Clemson receivers dropped five passes in the half which made the offensive game plan look choppy at times. The interception set up the second Orange touchdown that kept the game close at the break.

Clemson struggled on third down and converted on 6-of-11 third down opportunities.

Travis Etienne carried the ball 11 times for 59 yards and a 25-yard touchdown with 4:25 to play in the first quarter.

On defense the Tigers gave up chunk plays but safety Nolan Turner hauled in his third interception of the season. They held Syracuse to 1-for-6 on third down and came away with a stop on fourth down. Orange tailback Sean Tucker ran 10 times for 63 yards and a touchdown.

Clemson hopes to shore up its first half mistakes with a fresh 30 minutes. 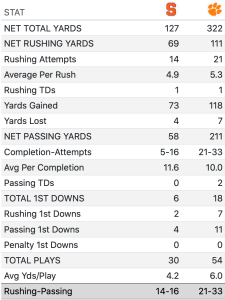