Clemson running back commitment Phil Mafah shined on a national stage this past weekend, pacing his Grayson (Loganville, Ga.) team to a 47-7 victory over Parkview (Lilburn, Ga.) on Friday night in a game that was televised by ESPN2.

Mafah was named Player of the Game during the broadcast after rushing for 149 yards and two touchdowns on only 12 carries while playing just a little more than a half in the blowout win.

“If you don’t know the name Phil Mafah, now you do,” ESPN play-by-play announcer Jay Alter said to the national audience. “Could be the next great Clemson running back. … He has set the tone in this game.”

Mafah began the night with six carries for 95 yards in the first quarter, including a 65-yard touchdown burst that gave Grayson (7-0) a 13-0 advantage midway through the opening period.

The highly regarded prospect later found paydirt again on a 19-yard touchdown run with 6:41 left before halftime, extending the Rams’ lead to 31-7.

“The Clemson four-star running back commit Phil Mafah has been outstanding in the first half,” ESPN recruiting coordinator and commentator Craig Haubert said. “A physical runner with tremendous feet and balance.”

“He has been absolutely tremendous tonight,” Alter added. “A punishing runner.” 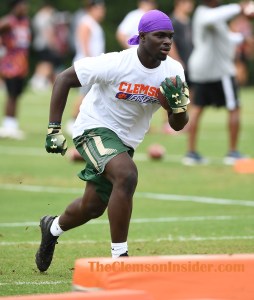 Mafah has consistently gashed opposing competition on the ground throughout his senior season. Through seven games, the 6-foot-1, 215-pounder has racked up 983 yards and 15 rushing touchdowns on 107 carries, an average of 9.2 yards per attempt.

ESPN ranks Mafah, who became the Tigers’ first class of 2021 commitment in August 2019, as the nation’s No. 15 running back among seniors.

“He’s been as advertised,” Haubert said. “Such a powerful runner. Can be really effective between the tackles, has the ability to bounce it to the outside. I don’t know if he’s a guy who’s going to wow you in the testing setting in terms of his 40. But he’s got football speed, and when he gets to the second level, he’s fast enough to be able to kind of keep that step he may have on a defensive back to take it to the house. Tremendous balance, does not go down on first contact.

“The one part of the game maybe he’s not the strongest is as a receiver out of the backfield, but as I said that they started to target him more frequently. And then one of the interesting things, too, is here’s one of the top running backs in the nation having a great night, and what is he? He’s out there on special teams as well.”

Mafah, who also serves as Grayson’s punter, pinned Parkview inside its own 10-yard line with a 49-yard punt at one point in the contest.

In addition to lauding Mafah for his on-field ability, Haubert and Alter spoke highly of the future Tiger as a person off the field, too.

“The thing with Phil Mafah is his coach raved about the type of kid he is as well — well rounded, just not as a football player but a young man as well,” Haubert said.

Added Alter: “(Grayson) head coach Adam Carter, talking about Mafah, said if my son – and take football out of it – is like Phil Mafah, I’d be so happy, I’d feel so accomplished as a dad.

“Clemson is getting a great one on and off the field.”

One of nation's top safeties locks in official visit to Clemson

One of nation's top safeties locks in official visit to Clemson

One of the nation’s top safety prospects in the 2022 class has scheduled a few more official visits, including one to Clemson. Las Vegas (Nev.) Bishop Gorman four-star Zion Branch said on social media (…)

Clemson football coach Dabo Swinney dropped by softball practice Tuesday as the Tigers get ready for the Tuscaloosa NCAA Regional at Alabama on Friday. The Tigers play Troy at 3 p.m. in Game 1 of the (…)

Oliver Bridges didn’t have a junior high school football season in the fall due to the COVID-19 pandemic, so the versatile defensive back from the Bullis School in Potomac, Md., has been hitting the camp (…)

A Florida senator says the NCAA is about to have a mess on its hands when legislation for Name, Image and Likeness begins later this summer for some states. Last week, NCAA President Mark Emmert called on the (…)

In a few months Clemson and Georgia will renew their regional rivalry on the gridiron in the Duke’s Mayo Kickoff Classic at Bank of America Stadium in Charlotte at 7:30 p.m. on Sept. 4. September is still a (…)

A former Clemson student-athlete that recently entered the transfer portal announced his new home on Tuesday. Lynn Kidd who entered Clemson as a four-star center out of IMG Academy announced on (…)

Zack Gordon and Turk Pettit both had rounds of two-under-par 69 to lead Clemson to a five-under-par team score of 279 on Tuesday, and a tie for fifth entering the final round of the 2021 NCAA Kingston (…)

When will Clemson pull the trigger, or will it?

The University of South Carolina did something Tuesday that Clemson has not decided on, yet. Stadium capacity at this weekend’s baseball series between Tennessee and South Carolina at Founders Park will be (…)

Uiagalelei not ranked as high among college football's best QBs