Even though Clemson came up short, Trenton Simpson had the time of his life playing in Saturday’s top-four matchup against Notre Dame in South Bend, and the big game served as a growing experience for the true freshman linebacker.

“Even when I put on my pads every time and I know it’s time to go play and I look at my last name on my jersey, I smile,” Simpson said to the media on Monday. “But as I was playing that game, just the way it happened, I was just happy to be out there. I’m proud to see how I’m performing now and just taking advantage of the moment. … It was just a fun game for me. Win or loss, I learned a lot from this game, and I did have a fun time.”

Starting at the nickel-SAM position in place of the injured Mike Jones, who suffered a hamstring injury vs. Syracuse on Oct. 24, Simpson tied for second on the team with six total tackles in the Tigers’ 47-40, double-overtime loss at Notre Dame. The Charlotte, N.C., native also logged half of a tackle for loss to go with a quarterback hurry.

Simpson is pleased with his performance against the Fighting Irish, but at the same time, knows he made some mistakes he can clean up moving forward as the Tigers go through their “championship phase” of the season.

“It was a great feeling, way to start my career off with a great team to play against for my first start,” he said. “I felt like I played pretty good. There’s some things I can correct, but also I’m proud of myself. Really good team, really great game. I was prepared, and I’m just proud of myself, the way I played. It was just great to be in that type of atmosphere and see what it’s like now during the season so once we get to the playoffs and stuff, I won’t be phased by the moment. It was just a great experience for me.”

Simpson has played in all eight games of his freshman season this year, recording snaps on defense in seven of those, and has accounted for 20 tackles, 2.5 tackles for loss and a couple of sacks to go with three quarterback pressures.

The former five-star prospect, who was ranked as the nation’s No. 1 outside linebacker coming out of Mallard Creek High School, is beginning to feel comfortable on the field and seeing his confidence grow as he continues to gain experience.

“My knowledge, just confidence of being out there now, it’s increased a lot,” Simpson said. “When I go out there now, it’s getting back to being comfortable. It’s starting to feel more like practice, being in the swing of things, being able to talk to my teammates while I’m on the field. I’m getting very comfortable. These last two games under my belt, now I feel like I can go out there and I’m confident now, I’m comfortable and I feel great now playing in front of teams like that and also on stages like that.” 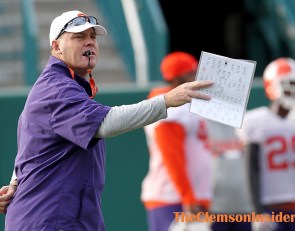 Earlier in the day, newly hired Pac-12 Commissioner George Kliavkoff said he was in favor of expanding the College Football Playoff and that an announcement on such could come as early as June. (…)