McElrathbey has already inspired change, movie hopes to do more

McElrathbey has already inspired change, movie hopes to do more

Dabo Swinney remembers when Ray Ray McElrathbey decided he was going to be the legal guarding of his little brother, Fahmarr, prior to the 2006 football season.

At the time, Swinney was the wide receivers’ coach on Tommy Bowden’s staff at Clemson, and McElrathbey was a young defensive back that was expected to see playing time in the secondary and on special teams.

However, when McElrathbey’s mother had to go into a drug rehab program, the then 19-year old stepped up and became Fahmarr’s legal guarding.

“I was very aware of the situation and I remember when all of that went down,” Swinney said. “It was a very sad situation. You are a kid going off to college and you’re trying to focus on what you have to do here, and it happens a lot. Sometimes these kids get distracted or pulled by things that are going on at home that they have no control over it. All of sudden you have a crisis situation.”

But McElrathbey never shied away from helping his brother. He did not want him to fall in the hands of social services and bounce around from foster home to foster home. So, he had him come live with him at Clemson. 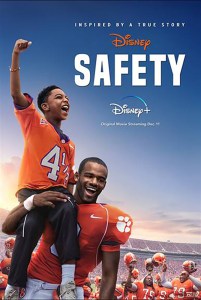 Disney’s “Safety” is a drama inspired by the empowering true story of former Clemson University safety Ray McElrathbey, a young man facing a series of challenging circumstances, whose dedication and persistence help him to triumph over repeated adversities. Aided by his teammates and the Clemson community, he succeeds on the field while simultaneously raising and caring for his 11-year-old brother Fahmarr. “Safety” will be released on Disney+ on Friday.

“The most difficult part about the first few months was, I guess, was straddling the line between of what I was able to do and what others were able to do,” McElrathbey said. “Being that I was moving in silence and not necessarily telling a lot of people what I was doing early on.

“It was just being alone for the most part in my decision, that was the toughest part. But once everyone found out, life became a lot easier. But then for a moment it was harder because no one could help.”

However, McElrathbey was not alone. The Clemson football program and community rallied around him and Fahmarr.

“The next thing you know, Ray Ray stepped up and brought his brother in. It created some interesting dynamics, obviously,” Swinney said.

The NCAA granted a waiver that allowed Clemson’s coaches, staff, fellow teammates and others in the Clemson community to help with daily duties such as providing Fahmarr rides to school and a way back home, help with homework and other extracurricular activities.

“Eventually everyone was allowed to help and my teammates were always there. They were always guys that I could count on,” McElrathbey said. “And so, even through the tougher times, I had people I could lean on and that was God’s gift, I guess.”

The NCAA also allowed Clemson University to set up a trust fund for Fahmarr to help McElrathbey with the financial strains that come with raising an 11-year old child.

“I just remember our compliance had to do waivers and stuff like that,” Swinney said. “There were just little things. Like trying to get him to school and helping with basic humanitarian type needs. There was that process that went on. I remember some of the wives working together to try and help him.

“It is certainly a very unique story.”

It is a story that has been made into a movie called Safety. Disney picked up the rights to the film and shot some of the movie on location in Clemson in September of 2019. Some of the movie was filmed around the university’s campus, Memorial Stadium and at the Jervey Athletic Center.

Safety will premiere Friday on Disney+. It is the first original sports film by Disney+.

The movie recreated some scenes from Clemson’s 54-6 win over Florida Atlantic in 2006 at halftime of Clemson’s game against Charlotte on September 21, 2019.

Since the days of McElrathbey and his brother, things have changed in the NCAA. The organization is a little more sensitive to player needs than it used to be as it strives to find more way to help its student athletes both on and off the field.

“It is night and day. The rules are very different from when I played and even back then,” Swinney said. “With the way the rules have changed with being able to feed your players. Obviously, the money is very different with the stipends and all of that stuff. It is just a very different situation.

“Now they have the emergency funds and all of those things available where players can tap into that, whether they need to go home, or they have some type of crisis going on. So, there has been a lot changed since then, but that was definitely a tough situation for Ray Ray at that time and his little brother, Fahmarr.”

It was a situation that inspired so many people at the time, and now it is about to inspire more.