One of nation’s top athletes reacts to Clemson offer

One of nation’s top athletes reacts to Clemson offer

On Wednesday, the Clemson football program pulled the trigger on an offer to one of the nation’s top prospects in the 2022 class regardless of position.

“Amazing,” Thompson said to The Clemson Insider of the offer shortly after announcing it. “I can’t even explain it! Beyond blessed.”

How did Thompson, who is considered one of the top five athletes in the country for the 2022 class, get the good news of his big offer from the Tigers?

“On the phone with coach (Tyler) Grisham,” he said.

Some schools are telling the versatile Thompson (5-11, 165) he could play on either side of the ball at the next level, but Grisham and the Tigers like him best on offense.

“I’ve talked to Coach Grisham, the wide receivers coach, some,” Thompson said. “I am being recruited mainly to play offense, touch the ball and make plays.”

Thompson has built a strong bond with Grisham and the Tigers’ staff.

“My relationship with them is great and will continue,” he said.

Thompson is getting ready to narrow down his list of 30-plus college offers, and Clemson is a lock to make the cut.

“I’m about to release a top 12 and so they will definitely be on there,” he said.

The speedy two-sport standout, who not only stars on the gridiron but in track and field has well, also owns football offers from schools such as Alabama, Auburn, Florida, Georgia, Notre Dame, Oklahoma, Oregon, Texas, Texas A&M and Southern Cal among others. 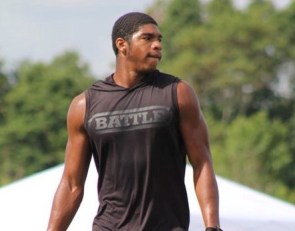