The phrase “Clemson Family” is heard all the time at Clemson. It is a term that is not used loosely, either. Never before has that phrase been truer than on Wednesday with the signing of quarterback Bubba Chandler and athlete Will Taylor.

And though the three-star recruits might seem like a couple of players any school would love to have playing for them, they are so much more. They are both elite baseball players, too, and both will play baseball for the Tigers when they get on campus.

Even better for the baseball program, they will not be counted against baseball’s 11.7 scholarship limit. Instead, they will both attend Clemson on football scholarships.

“Everybody talks about Clemson Family, right? And it is a family effort,” Clemson head baseball coach Monte Lee said to The Clemson Insider Wednesday. “That is truly how this happens.”

Chandler’s and Taylor’s path to sign with the Tigers was a little different. Taylor was a baseball commitment for Lee and the Tigers for a long time. Chandler on the other hand was a Georgia baseball commit, who switched his commitment to Clemson once Dabo Swinney offered him a football scholarship.

“We knew there was the potential for Will to become a Power Five level football recruit, as well, in the recruiting process,” Lee said. “That did come to fruition and lucky Coach Swinney and his staff decided to offer him a football scholarship. Now he is going to come to Clemson to play football and baseball.” 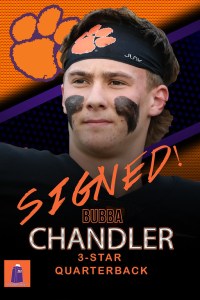 As mentioned, Clemson got Chandler the other way. He was committed to Georgia’s baseball program, but he was holding out for a football offer from the Bulldogs, as he grew up right down the road from Athens, Ga.

Lee said they did not even recruit Chandler to Clemson because he was a long time Georgia commit and it is their philosophy to not recruit a player who is committed to someone else. However, Clemson’s football program was recruiting the quarterback and when Swinney offered him a football scholarship, it opened the door for the Lee and the baseball program.

“He was a football recruit who just so happened to be, again, a top two-round level baseball player,” Lee said. “Bubba is a guy that has a chance to be a star in baseball, both ways. He is a potential weekend starter as soon as he steps foot on campus. He has a power right-handed arm that is really polished with a good breaking ball and command.

“But he also can really swing the bat. He is going to play both. He could be a Davis Sharpe type guy for us, but he also played shortstop. He is just an outstanding athlete. He is a bigger kid and has a left-handed bat and has high-level tools on the mound as well.” 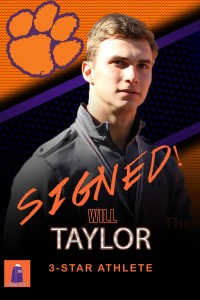 Though Taylor signed as an athlete for the football program, Lee said he is the best baseball prospect in the state of South Carolina and has the potential to be a top two-round level player in the Major League Baseball Draft in June.

“We believe there is a chance he could have to turn down a significant amount of money to come to school,” Lee said. “He has incredible tools. He is one of the fastest players we have ever recruited. He is a surefire centerfielder. He has bat speed. He has power. He can really run, and he can throw. He has outstanding tools.

“He is a guy, we believe, can step in and compete right away at this level.”

Lee says the baseball program is going to have to fight off the Major League Draft to get Chandler and Taylor, but he said them signing with the Clemson Football team will help their case.

“Signing a football scholarship with the ability to come and play both, I think we have a good chance of getting those guys in school,” he said. “But we are really, really excited about both of those guys.”

Clemson has had success with guys playing football and baseball in the past. Most recently, former Clemson defensive tackle D.J. Reader played both for a short time. The most famous player to do both, successfully, at Clemson was former quarterback Kyle Parker.

Parker led the baseball team to the 2010 College World Series as an All-American outfielder, while also leading the football team to its first appearance in the ACC Championship Game in 2009. He became the first, and still only athlete, in NCAA history to throw 20 touchdown passes and hit 20 home runs in the same academic year.

Parker, of course, went on to become a first-round draft pick of the Colorado Rockies in 2010.

The Clemson Tigers travel to Athens to take on No. 21 Georgia on Tuesday night. The Tigers are hoping to snap a six-game losing streak. GAME SETUP • Who – Clemson (…)

Watson's lawyer: 'We are discovering an avalanche of false accusations'

Deshaun Watson has insisted he has not engaged in any improper conduct. Now his lawyer is saying they can prove it. After filing a statement on behalf of the former Clemson quarterback on Monday, (…)

When DJ Wesolak trimmed down his list of around 50 scholarship offers last weekend, the four-star defensive end from Boonville, Missouri, felt a sense of relief. After releasing his top 15 schools on social (…)

Former Clemson running back is visiting an NFC West team. Free agent running back Wayne Gallman, who played at Clemson from 2013-’16, is visiting the San Francisco 49ers, according to ESPN’s Field Yates. (…)

The Clemson Insider has confirmed through sources that 6-foot-10, 225-pound power forward Ben Middlebrooks has given his commitment to Clemson men’s basketball coach Brad Brownell. TCI has also learned (…)

Could former Tiger reunite with his coaching father?

The Baltimore Ravens’ official Twitter account posted a video Monday on former Clemson receiver Amari Rodgers. Rodgers’ father, Tee Martin, is the Ravens’ wide receivers coach, so could the two reunite in the (…)

As the NFL Draft approaches, one of the top questions in the draft is who will be the first running back off the board? Will it be Alabama’s Najee Harris? Will it be Clemson’s Travis Etienne? A (…)

The Clemson women’s soccer team earned its seventh consecutive NCAA Tournament selection after receiving a 14-seed during Monday afternoon’s selection show. It is the 21st all-time appearance for (…)

Clemson in top group for one of nation's top D-linemen

One of the nation’s top defensive line prospects in the 2022 class narrowed down his list of over two dozen offers on Monday afternoon when he released his top 12 schools on social media. Clemson made the (…)

Clemson favored to win it all

Clemson in top group for one of nation's top D-linemen

Did Carman solidify himself as a Day 2 pick?