5-star Leigh discusses decision to join Dabo and the Tigers

5-star Leigh discusses decision to join Dabo and the Tigers

Clemson formally added another big-time player to its 2021 recruiting class on Saturday when Fairfax (Va.) Robinson five-star offensive tackle Tristan Leigh announced his commitment to the Tigers during the “All-American Bowl: Declaration Day” show on NBC.

“We put a lot of time into this decision,” Leigh said during NBC’s broadcast. “It’s what I wanted and dreamed about since I could even remember.”

Dabo Swinney and the culture that Clemson’s head coach has built drew Leigh to the program.

“Definitely where it starts up top with Coach Swinney and the message he brings down to his players, which is, it’s all the family and we win together and do everything together, we lose together and win together,” Leigh said. “So, just being successful.”

Leigh’s mother, Laura Rigney, who has multiple sclerosis, is a big inspiration to Leigh and was exactly that as he went through the recruiting process.

“She fights her battle with MS every single day, and she put her time and money into me, took me on trips all around the country to find where my home was going to be,” he said. “But just seeing her fight every day, it gives me motivation to succeed.”

As for Leigh’s father, Stanley — a former running back at Virginia in the early 1990s — he was always by Leigh’s side to give him advice throughout the process.

“My dad’s best advice has been stay humble and put your head down and work,” Leigh said. “He’s been big for me, and just him going through the process and being there for me, he’s always telling me right from wrong going through in this process, and he’s shown me the ropes with the game of football and I appreciate him for that.”

Beyond Clemson, Stanley sees an NFL future ahead for his son so long as he stays healthy and puts in the work.

“I think if he stays healthy, stays focused, keeps his head in the books and keeps that student-of-the-game type mentality, I can see him playing on Sundays,” Stanley said.

According to the 247Sports Composite rankings, Leigh is the No. 1 prospect from the state of Virginia, No. 4 offensive tackle nationally and No. 11 overall prospect in the 2021 class. 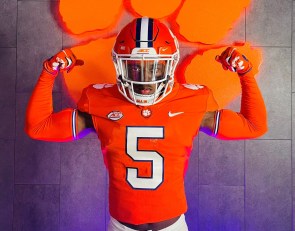 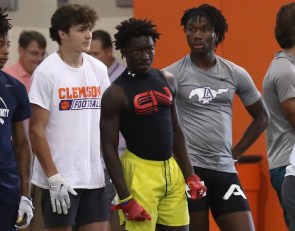