Clemson pitching will bring velocity with command to the mound

Clemson pitching will bring velocity with command to the mound

The days of college pitchers throwing an 85-mph sinker or slider is slowing going away. The game has changed to the point where most all pitchers are consistently throwing in the low 90s.

“That is just kind of where the game has gone,” Clemson head coach Monte Lee said to The Clemson Insider recently. “We train a lot of hitters to hit velocity because we know that is what they are going to face… There are so many more guys that are throwing 90-plus, 92-plus, so you have to train your hitters to hit it.”

But do not get Lee wrong, he is training his pitchers to throw with more velocity as well.

“The thing that I like about this pitching staff is that we have more guys that are throwing hard than we have had in the past, but we also have a punch of guys that throw strikes,” the Clemson coach said. “The game has not changed on that side of it in over hundred years. So, there are a lot of guys that throw hard, but can’t throw strikes and that is not going to win your ballgames either.”

The key is a combination of both, which Lee feels like the Tigers have a good bit of this year. Perhaps the two best at it for Clemson is right-hand pitcher Mack Anglin and Carter Raffield.

Anglin, a redshirt freshman, has better stuff than most on the team and if he can gain better command of his pitches, then Lee thinks he is going to be a factor on the Tigers’ pitching staff. Along with Raffield, Lee says their pitches are sometimes touching 96 and 97 mph.

“It is a combination. That is the key. It is finding that happy medium,” Lee said. “This guy throws a lot of strikes, but he also has some extra velocity. You want to have a pitching staff that brings both to the table, and we got some guys.

“You look at [Davis] Sharpe, [Mat] Clark and [Keyshawn] Askew, those guys don’t throw as hard, but they pound the strike zone. You want to have a combination of both, and this pitching staff has ten guys that are all pitching over 90, but they all throw strikes. You can’t have one without the other.” 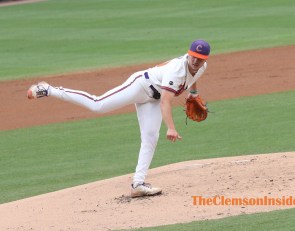