A drive for the ages

A drive for the ages

Editors note: Four years ago, today, January 9, 2017, Clemson knocked off Alabama in the 2017 College Football Playoff National Championship Game in Tampa, Fla. Below is The Clemson Insider’s game story recounting the events on how the Tigers came back to win the game.

TAMPA, Fla. — Deshaun Watson threw a two-yard touchdown pass to Hunter Renfrow with one second left, lifting Clemson to its first national championship in 35 years, as the Tigers knocked off No. 1 Alabama, 35-31, Monday at Raymond James Stadium in Tampa, Fla.

With six seconds to play, following a pass inference by the Crimson Tide’s Anthony Averett on Mike Williams, Watson took the shotgun snap and rolled to his right where Artavis Scott rubbed the Alabama defenders and Renfrow bounced to the flats where he was wide open for the touchdown.

“I knew on that last play that something we always work on, if Tay does his job, Renfrow was going to find a way into the end zone, and that’s what we did, and we pulled it out,” Watson said afterwards.

It was Watson’s third touchdown pass of the game as the MVP completed 36-of-56 passes for a national championship-game record 420 yards.

On the final drive, Clemson took over the football at its own 32 with 2:01 left on the clock, and then Watson engineered a drive for the ages.

The final drive was nine plays and covered 68 yards in two minutes. Watson hit Mike Williams with a 26-yard completion in the drive and then a few players later he found tight end Jordan Leggett for a gain of 17 yards.

Then, with first-and-goal at the Alabama two, Watson rolled to his right where for the second time in the game, Renfrow and Watson hooked up for a touchdown. Earlier, Watson threw a 24-yard touchdown pass to Renfrow in the third quarter. 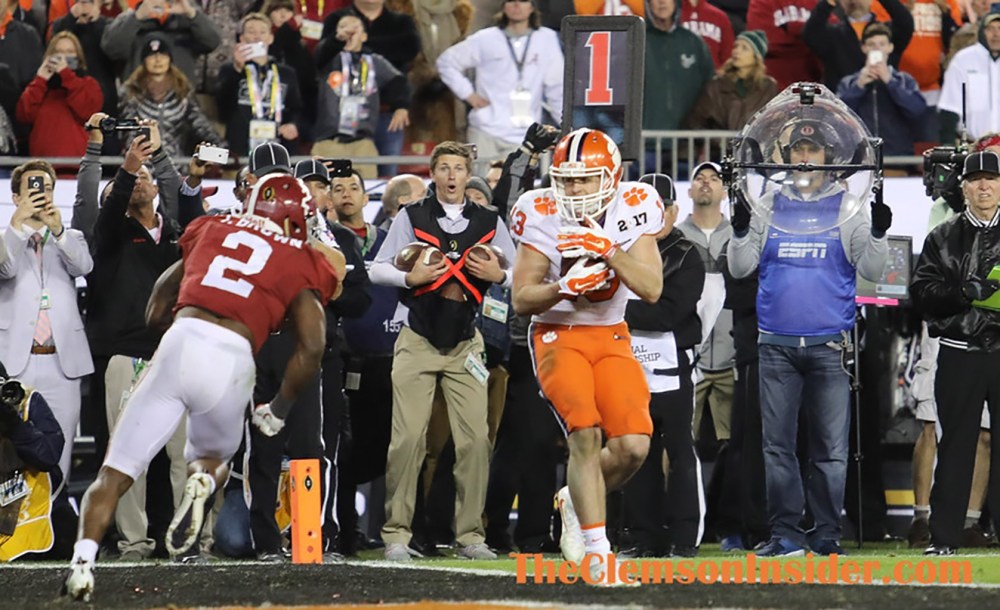 Deshaun Watson threw a two-yard touchdown pass to Hunter Renfrow with one second left, lifting Clemson to its first national championship in 35 years, as the Tigers knocked off No. 1 Alabama, 35-31, on January 9, 2017, at Raymond James Stadium in Tampa, Fla. (Dawson Powers/The Clemson Insider)

“Never in a million years. It’s been such a journey for me,” Renfrow said. “It’s like I got knocked out in the third quarter and this was all a dream. Credit to – I think my faith in God really got me through, just passing up the money to go to App State and come and playing for a guy like Coach Swinney, and a quarterback like Deshaun is pretty special.”

With 2:07 to play in the game, Jalen Hurts went 30 yards up the middle to give Alabama a 31-28 lead. In the drive, Hurts hit ArDarius Stewart for 15 yards, and then on fourth-and-one, Damien Harris gained five yards. On the next play, Stewart threw a pass on a trick play to tight end O.J. Howard for 24 yards to the Clemson 30, and then Hurts ran 30 yards up the middle on the next play.

Three times Alabama had double digit leads on Clemson. The Tide took 14-0 lead in the second quarter, led 17-7 in the third quarter and had a 24-14 lead on the Tigers heading into the fourth quarter.

The Crimson Tide (14-1) owned Clemson in the first half. Running back Bo Scarbrough rushed for 76 yards and two touchdowns to pace the Crimson Tide to their 14-0 lead.

Following Bama’s fourth-down stop on Clemson’s opening drive, it needed just three plays to go 59 yards as Scrabrough raced 25 yards off the left side to put the Tide up 7-0 with 9:23 to play in the first quarter.

After a couple exchange of punts the Crimson Tide extended their lead to 14-0 when Scrabrough again went around the left side for a 37-yard touchdown with 10:42 to play in the first half.

Clemson finally got aggressive midway through the second quarter, when Deon Cain took a pass from Watson and then moved his way in and out of the Alabama secondary for a 43-yard gain to the Alabama 39.

Three plays later, on third-and-10, Watson found Leggett down the middle of the field for a 26-yard gain to the Bama 13. After a 5-yard pass to Williams, Watson called his own number and ran off the left side for an 8-yard touchdown, cutting the Bama lead to 14-7 with 6:09 to play in the half.

After a Gallman fumble set up an Adam Griffith 27-yard field goal to make the score 17-7 with 12:25 to play in the third quarter, Clemson pooched punted on fourth-and-one from the Bama 43-yard line, which was downed at the Alabama five.

The Clemson defense then got a three-and-out, and J.K. Scott shanked the punt out of bounds at the Alabama 42.

It took the Tigers four plays to cash in on the bad punt as Watson found Renfrow over the middle for 24 yards on third down to make it a 17-14 game with 7:10 to play in the third quarter.

However, it did not take Alabama long to up the lead on 10 points when on second-and-10 from the 32-yard line, safety Van Smith bit on a fake screen pass and let tight end O.J. Howard break open and roam free in the secondary for a 68-yard touchdown pass with 1:53 to play in the third.

Clemson answered on its next possession to start the dramatic comeback, as Watson led the Tigers on a 72-yard scoring drive, capped with a four-yard touchdown pass to Williams with 14:00 to play in the game.