Making the Grade: Clemson’s QBs had an excellent year

Making the Grade: Clemson’s QBs had an excellent year

The 2020 football season was the most prolific passing year ever by a Clemson Football team.

Led by Heisman Trophy runner-up Trevor Lawrence, Clemson set a team record by averaging 348.5 yards per game through the air, which ranks sixth nationally. Clemson quarterbacks completed 66.5 percent of their 490 passes and just six of those attempts were intercepted.

They completed 31 touchdown passes, while throwing for 4,182 yards.

Projected by many to be the first overall pick in this year’s NFL Draft, Lawrence led Clemson to a sixth straight ACC Championship this season, while throwing for 3,153 yards and 24 touchdowns with just five interceptions. He completed 69.2 percent of his 334 passes. He averaged a Clemson record 315.3 yards per game through the air in 2020 and ran for eight touchdowns as well.

Lawrence was named the ACC Player of the Year in 2020, joining Steve Fuller (1977 and 1978), Tajh Boyd (2012) and Deshaun Watson (2015) as he only Clemson quarterbacks to win the award. Lawrence was the runner-up in the Heisman Trophy race in 2020 as well, joining Watson (2016) as the only players in Clemson history to finish second for the prestigious award.

The Cartersville, Ga., native was also voted as the MVP in the ACC Championship Game after he completed 25-of-36 passes for 322 yards and two touchdowns, while running for 90 yards and another score in the Tigers’ 34-10 win over then No. 2 Notre Dame.

He was also named as the Associated Press’ Offensive Player of the Year in the ACC, while the Football Writers Association of America named him First-Team All-American. 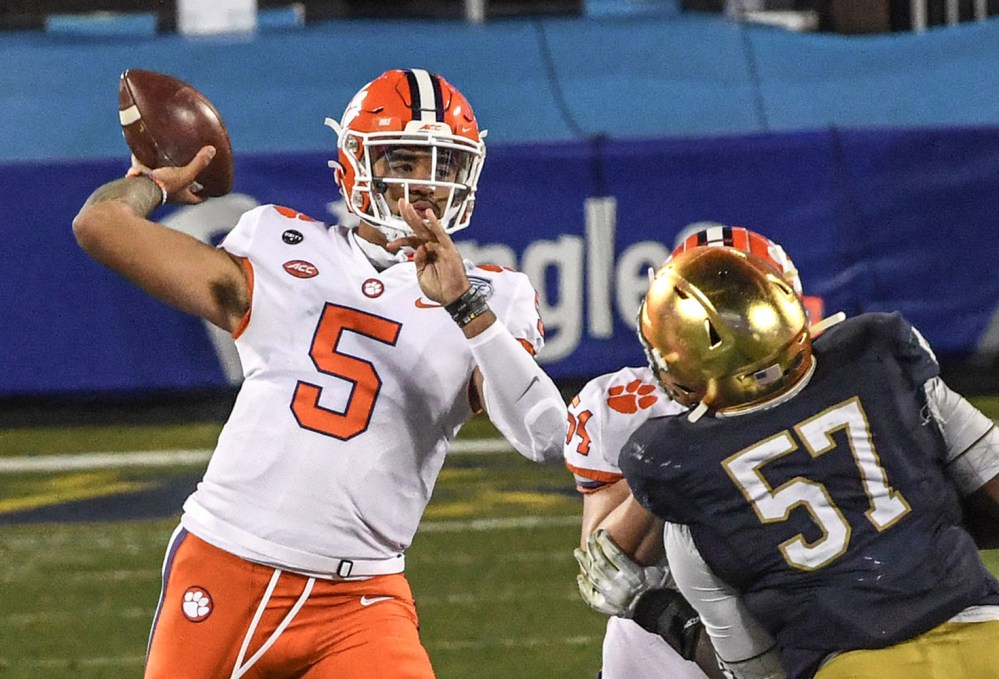 In Trevor Lawrence’s place, D.J. Uiagalelei played nearly flawless, completing 59-of-85 passes (69.4 percent) for 781 yards, four touchdowns and no interceptions. He also ran for two scores, including a 30-yard touchdown run against Boston College. (Photo courtesy of the ACC)

D.J. Uiagalelei played in 10 of Clemson’s 12 games this past season, including two starts after Trevor Lawrence tested positive for COVID-19 on Oct. 29, two days prior to the Boston College game.

In Lawrence’s place, Uiagalelei played nearly flawless, completing 59-of-85 passes (69.4 percent) for 781 yards, four touchdowns and no interceptions. He also ran for two scores, including a 30-yard touchdown run against Boston College.

Uiagalelei rallied Clemson from 18 points down to lead the Tigers to their greatest comeback in the history of Death Valley against Boston College. He completed 30-of-41 passes for 342 yards and two touchdowns while doing it.

Then the following week, he nearly willed the Tigers to a victory at then No. 3 Notre Dame in South Bend, while completing 29-of-44 passes for two touchdowns. He also ran for a touchdown in that game as well. His 439 passing yards is the most ever allowed by a Notre Dame defense.

Uiagalelei finished his first year at Clemson completing 78 of his 117 attempts (66.7 percent) for 914 yards and five touchdowns with no interceptions. He also added 60 rushing yards and scored four times.