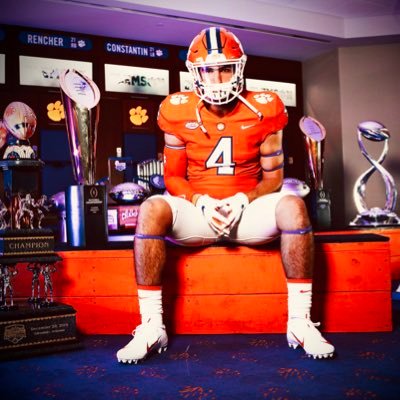 High school profile: Five-year letterman at Lakeland Christian, as he played in nine games as an eighth grader … played 48 games overall, recording 282 career tackles, 26.5 sacks, seven caused fumbles and four fumble recoveries … played seven games and had 40 tackles, including 6.5 tackles for loss, in pandemic-shortened 2020 season … had 92 tackles in 12 games, including 11 sacks and three caused fumbles in 2019 … had three double-figure tackle games that season, and had a career-high four sacks against King’s Academy …  as a sophomore in 2018, had career-high 95 tackles in 11 games with 6.5 sacks and three caused fumbles … had three double-figure tackle games, including a career-high 13 stops against Berkeley Prep … had 44 tackles and seven sacks in nine games as a freshman, including a three-sack performance against Land O’ Lakes High School … had 11 tackles in nine games as an eighth grader in 2016 … invited to play in the Under Armour All-America Game

Strengths: Denhoff will give the Tigers another talented pass-rusher that is good at stopping the run as well. A tall, lengthy weapon off the edge, Denhoff is explosive off the line and uses a combination of quickness and strength to get to the quarterback or ball-carrier on a consistent basis. He plays with toughness, relentless effort and a high motor and doesn’t take plays off. Because he is good against both the pass and the run, Denhoff has the ability to be a three-down player for the Tigers. There is a lot for Clemson to work with from a physical standpoint and his body should only continue to fill out at the next level.

Denhoff is a great young man with high character off the field who will fit right in at Clemson. On the field, he has a lot of upside with all the tools to make a significant impact for the Tigers in the future.

A productive stat-sheet stuffer throughout his high school career, Denhoff recorded 40 tackles, including 6.5 tackles for loss, in seven games during his pandemic-shortened senior season in 2020. As a junior in 2019, he tallied 92 tackles, including 11 sacks and three caused fumbles, in 12 games.

Denhoff was a three-sport athlete in high school who also played basketball and baseball.

How he fits in: Denhoff comes into Clemson at a position at which the Tigers have pretty good depth, but the coaching staff has shown a willingness to play true freshmen defensive ends in the past, and Denhoff will have the chance to showcase his skills in spring practice and gain strength over the spring and summer while learning the playbook. One of two defensive ends Clemson signed in December as part of the 2021 class, along with four-star Zaire Patterson, Denhoff arrived on campus at 243 pounds and hopes to get up to 255 pounds by the time his freshman season rolls around in the fall.

Coach speak: Clemson head coach Dabo Swinney on Denhoff: “The thing that we love about Cade – he’s got the length and the get-off and all that stuff that you look for in a D-end, he’s tough – but he’s got a motor you can’t coach. There is no switch. The switch is just broken. It’s taped on all the time.”

Clemson defensive ends coach Lemanski Hall on Denhoff: “We’re really excited about Cade and what he brings to the table. He camped with us, so we had a chance to really evaluate him. Watched him play in person. He’s long, explosive, plays with great effort, tough kid, and we’re excited to have him here.”