The Clemson Softball team completed the series sweep over Elon with an 8-0 victory in five innings on Sunday afternoon at McWhorter Stadium. The Tigers held Elon scoreless over the course of all three games this weekend. Second-year freshman righty Valerie Cagle surrendered just two hits in Saturday’s victory and improved to 6-1 in the circle this season. Clemson improved to 9-2 overall and won its sixth straight game, while the Phoenix fell to 2-3 on the season.

The Tigers took an early 1-0 lead in the first inning with a RBI single by Ansley Gilstrap to score lead-off batter McKenzie Clark from second base. The inning continued with an additional pair of Clemson runs scored on Marissa Guimbarda’s 40th career homer. Guimbarda, who leads the Tigers with five home runs on the season, also homered in the final play of game No. 2 in Saturday’s doubleheader.

In the fourth, Cammy Pereira registered her first triple of the season, which brought home Arielle Oda from first base. Cagle extended the Tigers lead in the fifth with a RBI double to right field, scoring Gilstrap from second base. Guimbarda also brought in a run for Clemson in the fifth with a RBI-scoring single to left field.

After tearing her ACL just a little over a year ago in Clemson’s inaugural weekend, outfielder Morgan Johnson registered her first career home run to right center field in the bottom of the fifth to end the game and the series in the Tigers’ favor.

Elon’s McKenzie Weber suffered the loss in the circle, falling to 0-1 on the season.

Up next, the Tigers travel to Charlottesville, Virginia for Clemson’s second ACC road series against Virginia (4-5, 2-3 ACC). Game one of the series is set for Friday March 5, at 5 p.m. 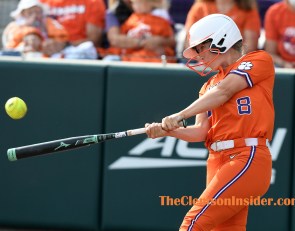