Swinney explains why they moved their star receiver to the slot

Clemson fans will remember this name … Derrick Hamilton, a.k.a. “Noodle.”

Hamilton was one of the most dynamic wide receivers in Clemson history. In just three years, he finished his career as the all-time leader in receptions (167), second in touchdown receptions (16) and fourth in receiving yards (2,312). He still ranks in the top 10 in all three categories.

Former Clemson coach Tommy Bowden gave him his nickname, “Noodle,” because he was so quick and explosive in and out his breaks and could change direction in a blink of an eye.

Hamilton is who Dabo Swinney sees when he watches Justyn Ross play, one reason why the Tigers have moved the All-American caliber player into the slot position this spring.

“I coached Derrick when I first got here. Derrick was very unique. I only had a year. I wish had him again,” Clemson’s head coach said. “But he was very unique with his size, but his ability to change direction, his lateral quickness and explosiveness in and out of cuts, that is one of Justyn’s gifts. He is so gifted. He is [Hunter] Renfrow-esque when it comes to his lateral ability.

“When you are in the slot, it is a quick change of direction and then you get a big body like that … he is unique.” 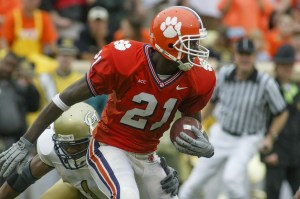 Derrick Hamilton was one of the most dynamic wide receivers in Clemson history. In just three years, he finished his career as the all-time leader in receptions (167), second in touchdown receptions (16) and fourth in receiving yards (2,312). He still ranks in the top 10 all-time in all three categories. (Photo courtesy of Clemson Athletic Communications)

A 6-foot-4, 205-pounds, Ross is a little bigger than Hamilton was, which makes him even more dynamic in the slot position because he can do everything else Hamilton could.

“That is kind of one of the things that make him unique.”

With Ross now back in the fold and being able to threaten defenses, the Tigers have one of the best and deepest wide receiving corps in the country. Joseph Ngata and Frank Ladson are both back in the mix after injury riddled seasons in 2020, while E.J. Williams emerged as a big-play threat in 2020 and Baylon Spector continues to make progress, as well.

“(Ross) can play any position. You have Ngata. You have Frank. You got E.J., you got Justyn and Spec, that is kind of our top five guys right there,” Swinney said. “All of those guys bring a lot of versatility, but at the end of the day we want to get the best three on the field. So, it will be a great opportunity and a great move for Justyn and his future as well because he is one of those rare guys with size that can be elite at any position.”

For the record, Hamilton hated the nickname, “Noodle.”