If you pay attention to Tony Elliott closely during football practice, you will notice he is usually the only coach on Dabo Swinney’s staff wearing an orange or purple Clemson baseball cap.

Because Elliott loves baseball and in particular Clemson Baseball. When the Tigers opened the 2021 season on Feb. 18, Clemson’s offensive coordinator was in attendance, sitting with his seven-year-old son, A.J., and teaching him all he can about the game.

“Growing up in California that was my first love. The first ball I picked up was a baseball,” Elliott said. “Those that are from California, and are familiar with California, baseball is king out there. I did not touch a basketball really until I moved to the South.”

Elliott first moved to Atlanta and then to Charleston where he became a three-sports star at James Island High School. He eventually earned a football scholarship at Air Force and later returned to South Carolina and walked on at Clemson where he earned a scholarship as a wide receiver. 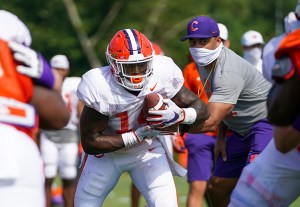 Clemson’s Tony Elliott hands the ball off to Kobe Pace during practice last August in Clemson, while wearing one of his purple Clemson baseball caps. (Clemson Athletics)

But baseball was Elliott’s first love.

“It was instilled in me at a young age,” he said. “I really like the internal battle, the internal competition of the game. Obviously, it is a physical game, but it is an extremely mental game. So, that is where it started. Growing up, I fell in love with the game. I played it all the way through high school. I was a three-sport athlete.

“I honestly believe, if I had concentrated on baseball, I might have been able to play for a while. But moving to the South, baseball was not quite as popular down in Charleston and in my community. So, I kind of transitioned more to football and a little bit of basketball, but I have always loved baseball.”

Like many of us do when it comes to our favorite sport, Elliott is instilling his love for baseball in his oldest son.

“He is eaten up with it. He loves baseball,” the Clemson coach said. “He is seven years old and in May turns eight. He is playing with the eight-and-under (team) but could probably play with the ten-and-under, so he just has a passion for it.

“It is just so cool to be able to share with him what my first passion, as it relates to sports, was. Just to let him know that you don’t have to follow in Daddy’s footsteps, but this is where Daddy started. This is what I like to do. If he loves it, then I am going to share everything I know with him.”

Coincidently, Elliott lives in the same neighborhood as Clemson head baseball coach Monte Lee and assistant head coach Bradley LeCroy. Though he sees Lee from time-to-time, and they are cordial, he is closer with LeCroy.

“I would say I am closer with Bradley because he has two sons that are close in age to my sons, so they are always out playing in the yard,” Elliott said. “During football season, when I am tied up, Bradley does a good job with the boys taking them out in the yard, letting them hit tennis balls. Taking them to the tennis court and work on different fundamentals.”

And thus, explains why Elliott wears a Clemson baseball cap to football practice.