Saturday was Senior Day at Clemson’s Littlejohn Coliseum. However, the story of the afternoon was all about a sophomore.

Guard Al-Amir Dawes came off the bench and scored a game-high 21 points and had five assists in leading Clemson to a 77-62 victory over Pittsburgh. Dawes was 7-of-10 from the field, including 5-of-8 from behind the arc.

Last year, the Tigers lost to Georgia Tech on Senior Day and Dawes wanted to make sure there was no repeat this season.

“It meant a lot to me to come out with a win on Senior Night,” Dawes said. “Last year, it was not a great Senior Night. So, to come out here and put on a performance like that for the seniors, I took it personally.”

With senior and leading scorer Aamir Simms on the bench for much of the second half in foul trouble, the Tigers got help from junior Hunter Tyson, who scored 16 points on 5-of-6 shooting.

“It was a big day for our seniors today and we wanted to send them off the right way because they have given this program so much. We are also thankful for them, so we really just had to dig in there and finish the game the right way.”

Pitt continued to hang around Clemson early in the second half and trailed just 43-41 with 16:43 to play. But the Tigers outscored the Panthers 25-9 over the next nine minutes and increased their lead to 18 points, 68-50, following a P.J. Hall layup with 7:25 to go. 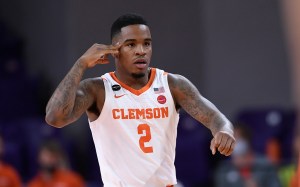 Clemson was able to give seniors Simms, Clyde Trapp and Jonathan Baehre a win on Senior Day thanks to 56 percent shooting overall and 48 percent (12-25) from three-point range.

“I thought we played well for a good portion of this game and we had to,” Clemson head coach Brad Brownell said.

Simms, in his final game at Littlejohn Coliseum, scored 12 points, had three rebounds and five assists in the victory. Simms was 5-of-8 from the field.

“It was good for the seniors to play well,” Brownell said. “Aamir got into foul trouble, so it was little bit harder to maybe get as much rhythm as he would have liked. But you are always nervous a little bit on a day like today. The seniors are not going to play as well, they have a lot on their minds, but this was a good performance.

“We shot the ball extremely well, which is helpful for us. We have shot the ball better lately, so that is good. But, again, I am just really proud of our team.”

Justin Champagnie, one of the ACC top scorers at over 18 points per game coming in, finished the day with 13 points to lead the Panthers. He had just three points in the first half. His 10 second half points came after Clemson already built its lead.

The Tigers have now beat Pitt eight consecutive times in the series, and end the regular season as winners in six of their last seven games.

Clemson’s next game will be in the ACC Tournament next Wednesday in Greensboro. The tournament’s brackets will be announced on Sunday by the ACC. 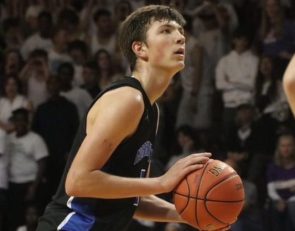