Dual-sport standout ready to live out dream at Clemson

Dual-sport standout ready to live out dream at Clemson

Bubba Chandler was originally committed to play baseball at Georgia. But once Clemson came calling with a scholarship offer to play football, the standout two-sport athlete quickly jumped on the opportunity.

Chandler, who hails from North Oconee High School in Bogart, Ga., decommitted from the Bulldogs four days after receiving the offer from the Tigers last May and then flipped his commitment to Clemson less than two weeks later.

A quarterback on the gridiron and shortstop/pitcher on the diamond, Chandler plans to play both football and baseball for Dabo Swinney and Monte Lee, respectively.

“Really first and foremost just the family atmosphere up there,” Chandler said of what drew him to Clemson. “You see what Clemson does every year on the football field, and I see what Coach Lee has been doing with baseball. They’re on the right track, and football is always going to be a dynasty, so I really just want to help it.”

Chandler continues to stay in touch with the football and baseball staffs as he gets ready to enroll this summer.

“The football staff is ready for me to get up there and really just start a new journey,” he said. “They’re ready to develop me more because I haven’t really been developed. I’m kind of a raw football player because I’ve never had a quarterbacks coach or done anything with that. And baseball, they’re ready for me to get in the system, see what I can do at the collegiate baseball level.”

A four-star quarterback prospect per ESPN and 247Sports, Chandler threw for 3,605 yards and 40 touchdowns and also rushed for 983 yards and nine more scores during his career at North Oconee High School. 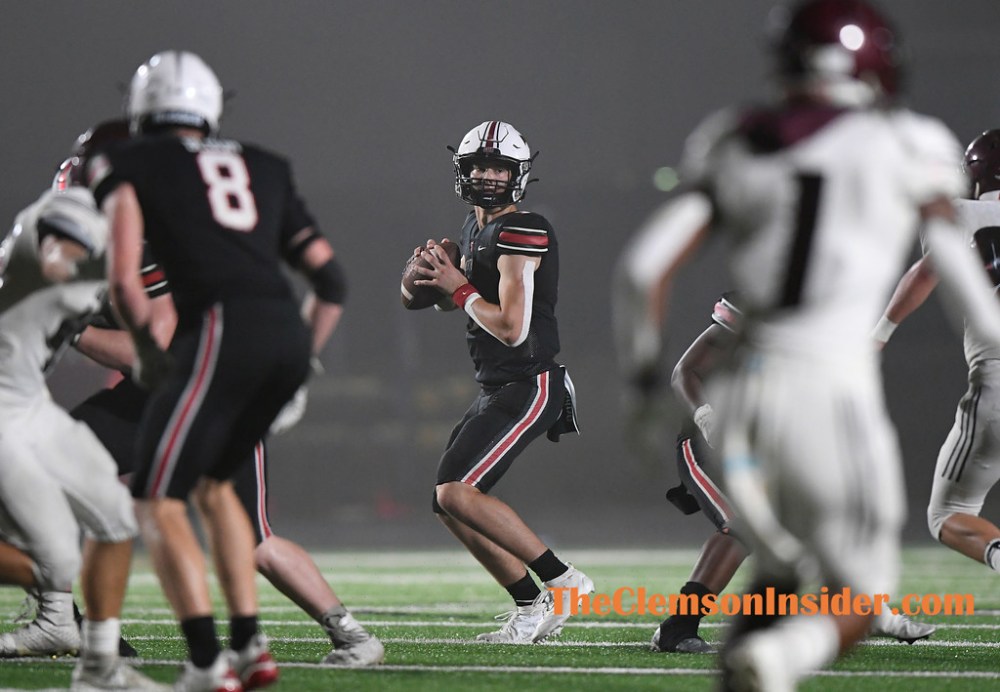 On the mound, Chandler has been clocked in the low 90s and struck out 16 in seven innings while hitting .435 during his pandemic-shortened baseball season last spring. In 2019, he batted .356 at the plate and posted a 7-0 record on the mound with 55 strikeouts in 41.1 innings.

“Both football and baseball, I’m a pretty athletic guy,” Chandler said. “I’ve made tremendous strides in the past calendar year of really just improving my speed. So, I’ve gotten a lot faster, and the arm strength’s still there of course. I feel like I can make pretty much any throw but need to tune up some things with footwork and all that. But I feel like I’ve got really good pocket presence when I’m playing football. And on the baseball field, I’m just super athletic.”

Chandler has formed a close bond with another player who is expected to suit up for both the football and baseball teams at Clemson – Will Taylor, an outfielder and quarterback/receiver from Dutch Fork High School in Irmo, S.C.

“Me and Will, we’re really good friends, talk pretty much every day,” Chandler said. “First met over the summer playing baseball and then it really took off from there with our relationship. But we’re both ready to do it, and having him to do it alongside with me is pretty great.”

Chandler is also friends with fellow Georgia native and former Clemson and Duke, now Appalachian State quarterback Chase Brice, who has told Chandler all about what a luxury it is to be a signal-caller for the Tigers throwing to the array of weapons that “Wide Receiver U” has at its disposal year in and year out.

“I’m pretty excited,” Chandler said. “One of my buddies used to play quarterback there, Chase Brice. He would always say in practice or either in the game, he would throw a ball and be like ‘ah, that’s a bad throw,’ and the next thing you know Justyn Ross or Tee Higgins is coming down with it. So, he said it was always a blessing. If you ever messed up on a throw, then the guys that were going to catch it were going to help you.”

As he prepares to make the transition to the next level, Chandler has a couple of goals in mind for his freshman year at Clemson.

“Adjust pretty quickly to the new life, and really just try to grow as a person and a player,” he said. “It’s something I’ve dreamed of since I was a little kid, so I finally get to live out that dream.”

When NFL scouts watch Clemson’s Trevor Lawrence play, there is a certain player that comes to mind. However, it is not the one Lawrence aspires to be compared to. Lawrence grew up a fan of Peyton Manning, (…)

After netting a brace in a 2-1 win over No. 11 South Carolina, freshman midfielder Megan Bornkamp was named the ACC Offensive Player of the Week, announced by the conference office on Tuesday. Bornkamp (…)

Former Clemson wide receiver Amari Rodgers will host his first football camp this Saturday at the Kroc Center in Greenville, S.C., from 2-5:30 p.m. The first four people to share the attached graphic (…)