While the Clemson softball team’s inaugural season was cut short due to the COVID-19 pandemic, the program’s second team has picked up right where the first one left off.

Head coach John Rittman’s squad is in the midst of a 17-game winning streak, sweeping five straight series, as well as tying both the Clemson Volleyball and Women’s Tennis teams for the longest winning streak in school history by a women’s program.

“Winning is fun, but winning is also hard, so this has not been an easy road,” Rittman said to The Clemson Insider. “All the credit goes to our players and our coaching staff, just the amount of work and effort that goes into having a season is certainly mindboggling, but to have the success that we have is just special and we’re not taking it for granted. We’re continuing to be humble, and we continue to work our butts off at practice.”

Though the program is just two years old, Clemson’s softball team has seen their fair share of success, but they have not been exempt from adversity.

Earlier this season, the Tigers were handed their only pair of losses as well as their lone series loss so far this season when facing nationally ranked Virginia Tech at McWhorter Stadium in Clemson.

While many teams would struggle moving forward, the Tigers instead took it as an opportunity to put their heads down and get to work… and get to work they did.

“To be able to face a team like Virginia Tech early in the season and get tested and to see their pitching staff and the quality pitchers that they had has definitely paid dividends for us since,” Rittman said. “This is a tough conference, and we know every weekend is going to be a grind. We know we’re going to face good pitching, teams that play good defense, and teams that can hit the ball. I think we’re just maturing as a program and it definitely helps to have a talented team with a lot of depth and players that are versatile, so all of those factors have played into it.

“These wins have not been easy, you know, a lot of them have been come-from-behind wins, a lot have been nail-biting games that could go either way. Fastpitch softball, like baseball, is all about pitching and playing good defense and getting those timely hits and we’ve been fortunate enough to do that.”

Now with a 20-2 overall and 12-2 ACC record so far this season, Clemson is looking forward to arguably its most challenging matchup yet in the Duke Blue Devils this weekend. While the Tigers struggled in their first meeting with the 11th-ranked Blue Devils last season, Rittman is excited to see what a difference a year can make when his Tigers take the field on Friday at McWhorter Stadium in Clemson.

“It’s going to be a great series and it’s going to be a great challenge for our young team,” Rittman said. “We played them in our second game of existence last year and they pretty much smoked us, so they’re a really good team. I think they should be ranked a lot higher than they are. They have three excellent pitchers, they play great defense, they’re like us offensively. They can hit the long balls, they can beat you with the short game, they’ve got speed, they’re aggressive. It’s going to be a challenging weekend, you know, they’re a very good team.” 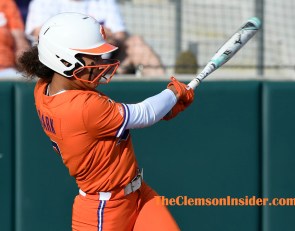