What’s next for Clemson recruiting after Walker’s pledge to UGA?

What’s next for Clemson recruiting after Walker’s pledge to UGA?

Clemson has been planning to take one linebacker in the 2022 class. So, what’s next for the Tigers in terms of their pursuits at the position after Walker’s pledge to UGA?

To date, Clemson has offered three other linebacker prospects in this cycle, if you include Marietta (Ga.) four-star Daniel Martin, who is listed as an outside backer by the major recruiting services.

While most schools involved in Martin’s recruitment are pursuing him as a linebacker, the Tigers are recruiting him as a safety but see him as a versatile defender who could eventually grow into a linebacker, similar to former Clemson star and current Arizona Cardinals linebacker Isaiah Simmons.

“They’ve been talking about how they would use me and how I could play a lot of places on their defense,” Martin told The Clemson Insider recently.

One of Clemson’s first linebacker offers went out last June to Montgomery (Ala.) Catholic four-star T.J. Dudley. A month later, he named the Tigers one of his top six schools along with Alabama, Auburn, Florida State, LSU and Oregon. 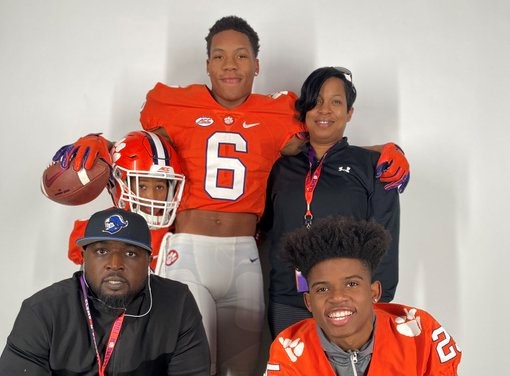 Clemson got Dudley on campus for the program’s junior day last spring, and he came away impressed.

Dudley was close to rendering a decision following his junior season but decided to hold off due to the NCAA dead period and wait until he could take visits this summer before making his commitment.

Auburn’s staff under new head coach Bryan Harsin is coming hard after Dudley, and the SEC’s Tigers could end up being the ACC’s Tigers biggest competition.

The Buckeyes are considered the odds-on favorite to land Murphy, but Clemson is among other schools that have been recruiting him hard.

Another linebacker on Clemson’s radar worth mentioning is Eoghan Kerry of powerhouse Mater Dei High School in Santa Ana, Calif.

Kerry, who grew up in Indiana, currently holds offers from Colorado, Nevada, Columbia, Penn and Yale. Schools such as Notre Dame, Cal, Boston College and Boise State are showing interest along with Clemson.

The plan for Kerry right now is to narrow down his recruitment following his junior season this spring and then go from there.

On March 11, Houston head coach David Culley said the Texans were committed to Deshaun Watson as their quarterback. However, that was before all the litigation broke out and the former Clemson quarterback (…)

Cyrus Moss, one of the country’s top edge rushers and a top-30 national prospect in the 2022 class, is down to five schools. The four-star defensive end/outside linebacker from powerhouse Bishop (…)

In just the program’s second year, its first full season, the Clemson softball team continues to make history. After winning an ACC Regular Season Championship last week and then advancing to the ACC Tournament (…)

Former Clemson star considered one of the top rookies to succeed

Being a rookie in the NFL is not easy, especially for those picked in the first and second rounds of a draft. No one has as much expectations to live up to than former Clemson quarterback Trevor (…)

Having secured a quarterback for the 2022 class in Austin (Texas) Westlake four-star Cade Klubnik, who committed to Clemson in March, the Tigers have been able to turn more of their attention to (…)

Former Clemson wide receiver Cornell Powell hit the practice field this weekend as the Kansas City Chiefs began their rookie minicamp. Check out this video from the Chiefs’ official Twitter account which (…)

Clemson came into the eighth inning on Sunday nursing a one-run lead on No. 10 Florida State in the rubber match of their three-game series. But, like they did in Game 1, the Seminoles scored four runs (…)