For the first time since committing to Clemson last December, and for the first time in nearly two years, Myrtle Beach (S.C.) four-star wide receiver Adam Randall made his way back to Tigertown earlier this month to attend the Orange & White Game at Death Valley.

“I definitely enjoyed being back,” Randall said. “That’s the first time I’ve been down there in about a year and a half. But it was great being back and just seeing the environment and culture again, especially during the spring game. Everybody was hyped to see football was back in some way, shape or form, and I was very excited to be there. … I was just very excited to be there and see the atmosphere that I’ve always loved and enjoyed.” 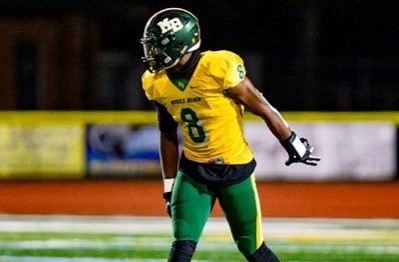 Randall, a 6-foot-3, 200-pound rising senior, was impressed by what he saw from the Tigers during the spring game and is excited to see what receivers like Justyn Ross and Frank Ladson – both of whom didn’t play in the spring game – can accomplish this season when they are back on the field, hopefully healthy, with D.J. Uiagalelei throwing passes to them.

“They have a lot of weapons that people don’t really realize,” Randall said. “Justyn Ross and Frank Ladson are coming back, and they’re going to be two experienced guys and have been through the moment, and they know what the deal is. So, I think that complimenting D.J. is going to be really hard for people in college to beat.”

While on campus, Randall hung out a lot with a couple of his fellow commits in Clemson’s 2022 class – Austin (Texas) Westlake four-star quarterback Cade Klubnik and Greenville (S.C.) four-star offensive lineman Collin Sadler – as well as one of the Tigers’ priority targets who attended the spring game, St. Louis (Mo.) Lutheran North four-star cornerback Toriano Pride.

The group of prospects ate dinner together at the Lakeside Lodge and were able to build a relationship face to face for the first time.

“We all just were sitting there, being 16-year-old kids, getting to know each other, and I think our bond is really good now after we got to see each other,” Randall said. “It’s kind of different than texting people for a very long time, and then you don’t really know how they are in person. But everybody’s really true to their personality and really great, and I’m glad that they’re going to be my teammates here soon, that I’m able to play with them because they seem like really great guys, and I’m excited to be with them.”

Randall plans to return to Clemson for the program’s “Elite Retreat” gathering from June 12-13, and he already can’t wait to get back on campus to spend time with the coaching staff — particularly head coach Dabo Swinney and receivers coach Tyler Grisham — along with some of the other top recruits in the country.

Randall hasn’t been able to talk to the coaches in person since he committed due to the NCAA dead period that has been in place since March 2020 because of COVID-19.

“I’m very excited for that,” he said of the Elite Retreat. “I’m very excited for that because I’ll get to see Coach Grisham again, work with him. Also get to see Coach Swinney. Ever since I committed and ever since I got an offer, I haven’t spoken to the staff in person ever since I got this offer. So, it’s going to be cool to see them and just see the excitement to build up next season, and I really am ready to be there and enjoy my time there.”

Swinney talks to TCI as proud dad of Clemson graduate

GREENVILLE, S.C. — It seemed like yesterday when Dabo Swinney accepted the job to be Tommy Bowden’s wide receiver’s coach at Clemson. Now, 18 years later, as the head coach, his oldest son, Will, (…)

Clemson softball extended its win streak to 18 to become the first women’s program in school history to reach that mark. The Tigers edged out the orange 4-2 in the first game of a three game series at Skytop (…)