Clemson fans knew early on this year about the exceptional young talent on the baseball field and softball diamond in Caden Grice and Valerie Cagle respectively.

In recent weeks the nation has taken notice with both receiving ACC and national player of the week honors.

Wednesday morning on the ACC Network’s Packer & Durham Show, Mark Packer asked Clemson baseball coach Monte Lee which player has made a bigger splash so far as both teams move towards the postseason.

“My answer would be Valerie Grice, I think they are one and the same,” Lee said. “They are both unbelievable players.” 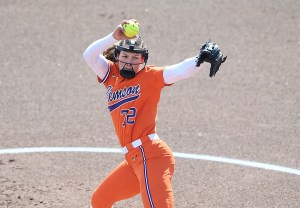 Of course, Lee touted the success of his freshman first baseman who leads the Tigers with a .358 batting average, 12 home runs and 43 RBIs, including four homers and 12 RBIs in the sweep of No. 4 Louisville this past weekend.

“Caden Grice, our guy, is just special he has come up with big hit after big hit he was the National Player of the Week,” Lee said. “He has been the ACC player of the week twice this year.”

But he also acknowledged second year freshman Valerie Cagle who is hitting .411 with 12 home runs and is 23-3 in the circle with a 0.94 ERA.

“Cagle, every time I turn on the television or look on social media, she is doing amazing things for Coach Rittman and their team,” Lee said. “So both of them right now are just superstars in our respective programs and the Clemson fans have a lot of things to be able to watch between Cagle and Grice.”

Lee also touted the athleticism and versatility of Grice as a runner, defensive player and pitcher.

“He’s pitched a little bit for us but is a guy we fully expect if Anglin and Askew get drafted that could slide into our weekend rotation next year and be a guy for us on the mound,” Lee said. “He is a very good athlete, and he plays some first base for us but could easily play in the outfield. He is a slightly above average runner for a guy that big and is a special talent.”

Tiger standout made a splash Tuesday

Clemson has landed a verbal commitment from another one of its Elite Retreat visitors. One of the nation’s top cornerbacks, St. Louis (Mo.) Lutheran North four-star Toriano Pride, announced his commitment to (…)

Rodgers fires back at PFF about Ross

Former Clemson wide receiver disagrees with an NFL Draft analyst’s opinion on who is the best route-runner in the 2022 draft class. Amari Rodgers, now with the Green Bay Packers, fired back on Twitter at the (…)

Even with the pandemic last year, Clemson fans still showed their support for the Tigers. No one has ever questioned Clemson fans’ loyalty to their Tigers. It has been second to none for decades, and (…)

Clemson standout Trevor Lawrence had a cool moment on Thursday. Madden ’22 released its official trailer ahead of its pending launch. The trailer showed the No. 1 overall pick in his Jaguars uniform getting (…)

At times last year, due to Tyler Davis’ health, the Clemson defense did not live up to its reputation. Known for their tough, physical style of play, and their ability to create havoc in opposing teams’ (…)

Tajh Boyd couldn’t help but smile while watching Dabo Swinney go to work during his high school football camp this month. “I had the biggest smile on my face when I saw Coach Swinney working with the (…)

An NFL coach heaped on high praise for a former Clemson standout on Wednesday. Former Clemson wide receiver Tee Higgins continues to be the topic of conversation following the Bengal’s mini camp this week. (…)

Two years ago, Clemson had one of the best offensive lines in the country. Two years later, college football people wonder if the Tigers can get back there. The 2020 season was a down year for Clemson along (…)