Monday was a big day at the WestZone of Memorial Stadium in Clemson, as South Carolina Gov. Henry McMaster, ceremoniously signed the state’s Name, Image and Likeness bill into law.

“We needed to do it some place and this is a great place. Clemson is a great school. It has won championships, great people and it is one of the most beautiful parts of our state and every part of our state is beautiful,” the Governor said when asked why he chose to sign the bill into law at Clemson. “There is a lot of enthusiasm for (the NIL) here, as there are by the other schools as you saw by the representatives. We could not do it at all of them.”

The NIL law will go into effect on July 1, 2022, for the state of South Carolina.

“This is a good way to allow student-athletes to utilize (their name, image and likeness) in a way that will not interfere with their school-work,” the Governor said. “This is also brings more attention to the schools and creates opportunity. It is a good thing.”

It also keeps the state of South Carolina’s schools competitive with other states that are doing the same thing. On July 1, Alabama, Georgia, Florida, Mississippi and New Mexico will have their NIL laws begin.

“Ours goes into effect next year and some goes into effect after that and there are a half-a-dozen other or 18 states that will pass a law of some kind,” Gov. McMaster said. “I think we are all a little bit different, but of course the NCAA may come out with some sort of rule or guidance themselves.”

The Governor says he is not concerned South Carolina is behind the five other states at the moment and he does not feel it is going to hurt in recruiting as some people might suspect.

“We got a lot to offer in South Carolina schools besides this,” Gov. McMaster said. “So, I think this will help us stay competitive. Like I said, there are (five) states that will go into effect next month and some next year and then others sometime after that because they have not passed legislation yet.

“If you want to go places, South Carolina is the place to be. These universities, these teams and these student-athletes are another reflection of the talent we have in South Carolina.”

McMaster was joined in Clemson by coaches and athletic officials from Clemson, South Carolina, Coastal Carolina, South Carolina State and a few others. There were also a few state senators as well as Clemson football players K.J. Henry, Matt Bockhorst, Darien Rencher and Will Brown. 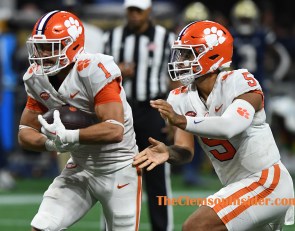