Cousin of Clemson legend carving out his own path

Cousin of Clemson legend carving out his own path

Clemson prides itself on being a family program.

That’s especially true when considering the connections and faces that come through Dabo Swinney Camp.

Walker caught up with The Clemson Insider regarding his time on campus and what he knows of the program just through his cousin.

“I liked it a lot,” Walker said of his visit to Clemson. “Overall, the school is a nice school with a school campus. The camp was just a good camp. The coaches are all nice and I was just glad that I could just process some information from them and take it with me and add it to my game.”

Walker was under close inspection by Clemson wide receivers coach Tyler Grisham, who took a liking to the young receiver. Grisham told Walker to just keep balling and grinding because he’s still got a lot more to learn, but with that, he’s still got a lot of time, he said.

Even though he’s already on Grisham’s radar, Walker has a connection to the program through Boyd. But beyond that, Boyd has been able to serve as a mentor for his younger cousin throughout his recruitment process, which is only just underway.

“It’s really good,” Walker said of being able to rely on his cousin. “It’s just always good to have that person that can relate and has gone through whatever you’ve been going through. All my questions, I go to him because he’s been through it all and he’s able to help me through this journey and process.”

Walker is already getting a head start. He holds offers from Syracuse, Duke and UMass. He’s also had the opportunity to work out with NFL wide receivers Mohamed Sanu and Elijah Moore during the offseason. Sanu currently plays for the San Francisco 49ers, while Moore was drafted by the New York Jets in the second round of April’s draft out of Ole Miss.

“It’s good because they know a lot more than I do, especially because they have a lot more training and a lot more experience than I do,” Walker said of getting to workout with the likes of Sanu and Moore. “I just take all the information that they give me and I just keep moving on with it.”

“If you want to be great, you have to work with the best,” he added. “Football is a very mental game too, all about just your mindset and how you’re thinking about the game. I’m glad that I just can learn that from the people that have the experience that I’m training with.”

Walker predicates his game on being a “great route runner.”

“I create a lot of space because of my route running and speed ability and I just use it to my advantage,” he said.

At the end of the day, Clemson will always hold a special place for Walker and it would mean a lot to receive an offer from the Tigers.

“I have a lot of love for Clemson,” Walker said, “especially as a kid, you always grow up watching the big-time college football teams. Watching Clemson, just getting to see what they’re all about. Hopefully, between these years that are going by, I can pick up an offer from there. It would be amazing, especially knowing that my cousin went there.” 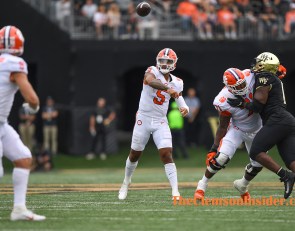 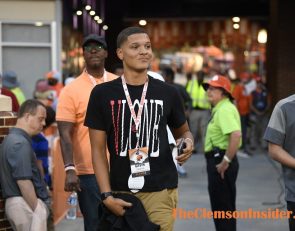