With players finally being able to take visits, plenty of local products made their way through Clemson this past month.

One of those prospects is Chapin (S.C.) 2022 OT Chase Sweigart, who has been coming to Dabo Swinney camp for years now

“I enjoyed going back to Clemson for camp,” Sweigart told The Clemson Insider. “I hadn’t been up there in a while. The last time I was up there was last year’s camp, but that got canceled due to Covid. Me and my family still went up there, though.”

Sweigart was finally able to see the coaches that he’s familiarized himself with over the past couple of years. He said it was good to see all the coaches again because he hasn’t been able to go to Swinney Camp over the past two years. Last year due to Covid and the year prior to that because of a broken ankle.

The highlight of the visit for Sweigart?

He was able to go on a tour of the facilities, checking everything out. Tigers’ redshirt sophomore offensive guard, Tayquon Johnson, took Sweigart and his family on the tour.

Another highlight for Sweigart was getting to talk with both Clemson offensive line coach Robbie Caldwell and offensive analyst Thomas Austin.

“I got pretty positive feedback,” he said. “They told me I looked great, just since the last time they’ve seen me, I’ve improved a lot. They’re keeping an eye on me and they’ll definitely see how my season goes this year.”

Sweigart has more of a relationship with Caldwell, as he’s been camping at Clemson since he was in second grade.

“He knows me and my family pretty well and he texted me the other day,” Sweigart said. ”He texted me the other day, reached out to me, just telling me hello. I would definitely say I have more of a relationship with Coach Caldwell, but I also have a good relationship with Coach Austin, before he left. He did come back, so we picked up where we left off.”

Sweigart has the opportunity to chat with Caldwell every year at camp. They talk about everything and are clearly comfortable around one another. Caldwell is always so welcoming to Sweigart and his family, he said.

“It would be a great opportunity for me,” Sweigart said of potentially coming to Clemson. “I would love to go there. It’s always been my goal as a kid to play for Clemson. Even now, I’m in the recruiting process. You can’t bank on everything. It would mean a lot to me if they offered.”

While he doesn’t hold an offer from the Tigers just yet, it’s just one of those things where he’s going to keep building a relationship with the coaching staff, while remaining patient.

When looking at where he’s going to spend his next 4-5 years, Sweigart is looking beyond football.

“I’m looking for a school that I would feel like I would enjoy, even if I wasn’t a player,” he said. “I look at it from a student standpoint, whether I would like it if I didn’t play football.”

Sweigart is a leader, who finishes his blocks and plays to the end of the whistle. The Tigers are impressed with his technique but want to see him improve on some smaller things, like getting quicker. 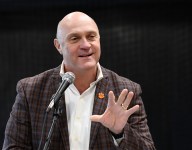