Clemson making investment it hopes will help with NIL

Clemson making investment it hopes will help with NIL

It’s no secret that certain schools in large cities or with massive alumni bases now posses an edge thanks to the name, image and likeness policy instituted by the NCAA on July 1.

For example, 90 football players at the University of Miami received a $6,000 deal from America Top Team in exchange for social media posts and in-person appearances.

While programs cannot negotiate deals on behalf of their student-athletes, blanket deals for their teams serve as a major advantage on the recruiting trail.

Clemson’s recent status in the college football landscape now faces a unique threat in the NIL. But the athletic department is doing it’s best to help the situation by harping on what has worked in the Dabo Swinney era, branding and facilities.

Clemson Athletics Director Dan Radakovich proposed facilities enhancements to the Board of Trustees Finance and Facilities Committee on Wednesday that he feels will help the Tigers stay on top. 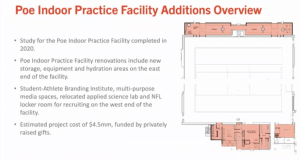 Clemson’s location in the upstate of South Carolina, small alumni base and type of degree programs mean less businesses can benefit from student-athlete advertisement.

In light of the Miami deal some Tigers have started to notice this on Twitter.

Last week Tiger Moving in Greenville signed 42 players in exchange for Instagram ads. But the deals for Clemson student-athletes have been relatively small so far.

The marquee feature of the indoor addition is the Student-Athlete Branding Institute that seeks to give Clemson a leg up on its competition from larger markets.

“The most exciting part of it on the west side is the Student-Athlete Branding Institute and multi-purpose media rooms,” Radakovich said. “The branding institute is going to be a really positive lever for us as it relates to NIL and our student-athletes creating their brand and move forward during their time at Clemson.”

The institute seeks to aid in content creation to assist athletes in growing their branding and national profile in hopes that it will lead to more NIL opportunities. 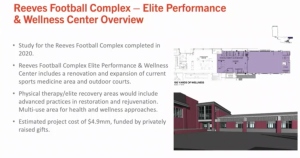 The other proposal adds an Elite Performance and Wellness Center to the Allen Reeves Football Complex that will expand the building to enclose the area currently occupied by the covered basketball court.

Earlier this summer Radakovich hinted at these enhancements meant to keep the Tigers ahead of college football’s elites and maintain the best facilities in the country.

Both plans were approved by the committee separately as smaller scale projects less than $5 million but still need to go before the whole Board of Trustees next week.

Trevor Lawrence struggled at Jaguars training camp on Monday as he threw three interceptions. But his teammate and fellow Clemson standout Travis Etienne stood up for Lawrence in his post practice (…)