CHARLOTTE — Clemson head coach Dabo Swinney had to set the record straight once again as he addressed the media during Thursday’s ACC Football Kickoff at the Westin in Charlotte.

After telling the local Clemson media back at Clemson on Tuesday that his thoughts on professionalism and name, image and likeness have been taken out of context. Obviously, the reporter who asked Swinney the second question of his question-and-answer session on Thursday, did not see his remarks.

The reporter said Swinney was “a little apprehensive about the NIL at first,” and he wanted to know what changed, which Swinney quickly explained was never the case.

“My comments were, I am against professionalization of college athletics. Always have been and always will be. I am for education, graduating, equipping young people through the game of football for life. That is what it has always been about and that is what it is always going to be about in college football. This does not change the collegiate model. It is just common sense. So, to say that, is inaccurate. This is common sense.”

Swinney explained if a player wants to do an autograph signing or wants to work a football camp in his hometown, he has nothing against it.

“I worked all through college,” he said. “There was never a day that I did not work on my time. I cleaned gutters. I umpired, I sold (kitchen) knifes. I worked non-stop all through college. For our kids not to have an opportunity to work on their time, I have never agreed to that. That is a common-sense thing to me. I would have liked more of it to have been done through scholarship, to be honest with you, because then everybody could participate. The NIL will be for some, but not for everybody.

“But we cannot facilitate it. We can educate. We can navigate. We can equip them. We have an entire educational library. July 1 did not just get here, and we said ‘Okay, let’s figure this out.’ This is something we have been preparing for a long time and built for though our program for twelve years. I appreciate your question, but the beginning of it was not accurate.” 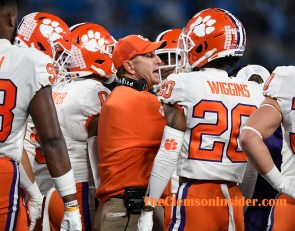