When someone meets one of those few people in life they have such high respect for, sometimes the meeting does not live up to the expectations.

However, that was not the case for Dabo Swinney when he first met Hall of Fame head coach Bobby Bowden.

“Some people can let you down when you maybe get to know them in a different way and I had this perception of him, and all I can say is that when I got to know him, kind of behind the curtain, if you will, he was even better than what I could imagine, as far as just his geniuses, kindness, just a smart man,” Clemson’s head coach said. “He is hilarious. He used to crack me up.”

Bowden was a college football head coach for 47 years, including his last 34 at Florida State. He complied a 377-129-4 record as a head coach, the second-winningest coach in the history of college football. He led the Seminoles to two national championships (1993, 1999) and to a record 14 consecutive top 5 finishes in the AP Poll from 1987-2000. He retired from coaching in 2009 and is the ACC’s all-time winningest coach with 173 wins.

“I could not even begin to do it justice and speak to what he has meant to the game of football and to so many men’s lives, now,” said Swinney, who has 140 wins in his ACC career. “Young people, coaches, and know telling how many people he never met who he influenced in a very positive way.

“I am fortunate that I got a chance to meet him and get to know him well and intimately well. I have known for a couple of weeks what was going on. I have so many great memories of him.”

Last week, during the ACC Football Kickoff, Bowden announced he has a terminal illness, which his son Terry confirmed to ESPN was pancreatic cancer.

“I’ve always tried to serve God’s purpose for my life, on and off the field, and I am prepared for what is to come,” Bowden said in a statement released by Florida State last Wednesday. “My wife Ann and our family have been life’s greatest blessing. I am at peace.”

Swinney said Bowden is the model for coaching and was such a great example of not losing sight of what is truly important in life.

Bowden last visited Clemson two years ago after just turning 90 years old. He came in and did chapel for the players and then spoke with Swinney and visited for over an hour.

“He was 90-years-old and just the conversation was fascinating,” Swinney said. 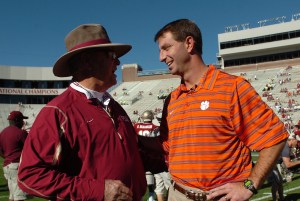 Swinney has always appreciated Bowden and his family on how they have always supported him. Swinney, of course, replaced Tommy Bowden as the Tigers’ head coach in 2008 after Tommy Bowden resigned in the middle of the season after Clemson got off to a rocky 3-3 start.

Tommy Bowden was Swinney’s position coach in his first year at Alabama and later Tommy Bowden brought Swinney on his Clemson staff in 2003 after Swinney had been out of the game for two years. Tommy Bowden even recommended Swinney be the interim coach after he stepped down, so he could have a chance to prove himself.

One of the first people to call Swinney after he was named the interim head coach in 2008 was Bobby Bowden.

“When all that went down, he wanted to let me know, ‘You have the Bowdens’ full support.’ Then three weeks later he smashed me down there in Tallahassee,” Swinney joked.

After having the interim tag removed from his title in December of 2008, Swinney attend the ACC’s Spring Meetings for the first that following may. He said it was an experience he will never forget, especially his time with Bowden.

“You are talking about Jim Grobe, [Al] Groh, Paul Johnson, [David] Cutcliffe, [Ralph] Friedgen, [Frank] Beamer and all of these guys, and here I come. And I walk in, and I am like, ‘That is Bobby Bowden!’ I was just fascinated sitting in the room with him,” Swinney recalled.

Like a rookie head coach, Swinney came into the coaches meeting that day at Amelia Island ready to go. He was armed with a notebook and some notes he had jotted down prior to the meeting.

“You know, he has only done this for forty years at this point or whatever. He has heard it all. And we are in these deep conversations, whatever the topic of the day was, and he is just flipping through the USA TODAY. You would have to be there, you know, but every now and then, he would go, ‘Boys! I don’t think we want to do that.’ And then he would flip back through the paper.”

Swinney has many other moments with Bowden through years, as an assistant coach and as a head coach. Like anyone who has had the pleasure of knowing Bobby Bowden, they are all special.

“He just has an unbelievable perspective, and he has just been a great example to me and so many people. Whenever that time comes and the Good Lord calls him home, he will be ready,” Swinney said.