A massive offensive line prospect from the Volunteer State, originally from England, has made the rounds this summer visiting several schools since June 1 when the NCAA recruiting dead period was lifted – including Clemson.

“I enjoyed my time at Clemson!” Crocker told The Clemson Insider. “I camped and then was invited to stay and tour by Coach Caldwell and Coach Ski. My highlight was just being able to learn and talk to Coach Caldwell.”

Crocker and his family moved to Tennessee when he was in elementary school. He is originally from England but also spent time in Australia and Scotland before coming stateside. 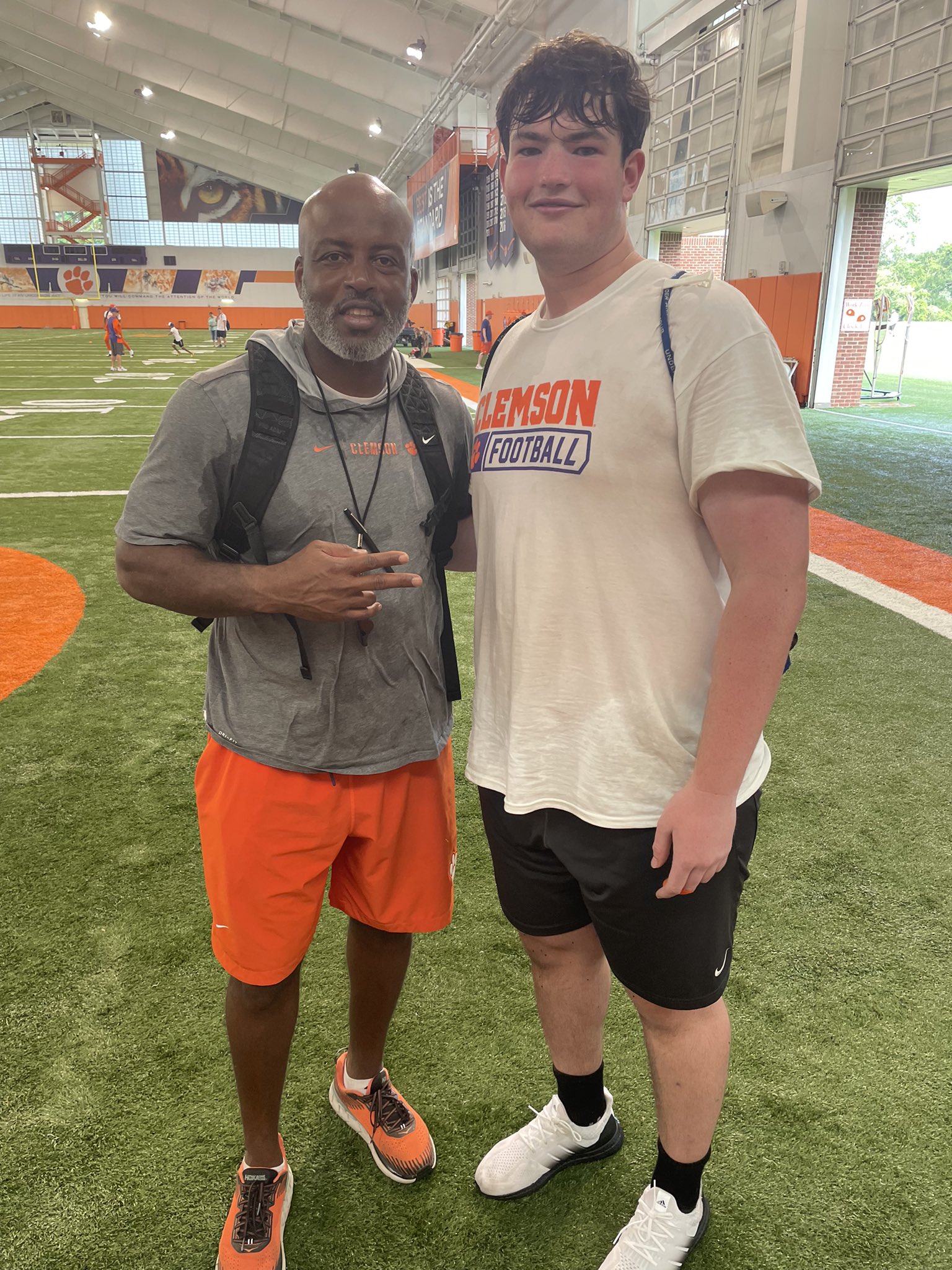 Caldwell liked what he saw from Crocker at the Swinney Camp and hopes to get him back on campus for a game this season.

“Coach Caldwell was just telling me how well he thought I performed,” Crocker said, “and how he wants me to come back in the fall.”

The Tigers have not yet joined Crocker’s double-digit list of scholarship offers but have conveyed a message of patience to him regarding a potential offer.

“They also told me to stay patient with getting an offer as Clemson does it [the recruiting process] differently and waits to offer,” he said.

Crocker’s offer sheet currently includes Tennessee, Georgia, Kentucky, Ole Miss, Mississippi State, Virginia Tech, Virginia, Louisville, Michigan and others. He says his recruitment is “wide open” right now, though there are some schools he communicates most frequently with such as Tennessee, Georgia, Kentucky, Mississippi State, Virginia, Penn State and TCU.

Clemson is an offer Crocker covets and one that would give him a lot to think about after his great visit to campus last month.

“Definitely getting an offer from Clemson would be one that I would want and consider for sure!” he said.

“The family aspect and togetherness really stands out,” he added.

Target on Clemson’s back is bigger than ever

Clemson has won 31 straight games against current full-time members in the ACC. But is that streak in jeopardy this Saturday in Raleigh? I think so. The ninth-ranked Tigers hit the road for the first time this (…)

A highly regarded athlete from the Sunshine State expects to be scouted in person by a Clemson assistant coach this week. Edgewater High School (Orlando, Fla.) four-star class of 2023 prospect Cedric (…)

Rece Davis on Clemson's offense: 'I don't know that it gets fixed'

ESPN College GameDay host Rece Davis discussed Clemson’s offensive struggles and believes the problems the Tigers have had on that side of the ball to this point in the 2021 season might not be fixable. “Of (…)

The Clemson Insider checked back in with this Class of 2023 prospect, who was recently offered by Clemson. Life Christain Academy (Colonial Heights, Va.) 2023 interior offensive lineman Joshua Miller has long (…)

Swinney on Clemson's first true road test: 'We better put it together'

Dabo Swinney echoed the same positive sentiments his assistant coaches and players had earlier in the week when it comes to Clemson’s offense. Speaking to the media for nearly 40 minutes during his weekly (…)

LaVonta Bentley found out during pregame warmups that he’d be starting. The hard-hitting redshirt sophomore linebacker was thrust into the starting lineup against Georgia Tech after Baylon Spector was (…)

The Clemson Insider checked back in with this talented Peach State four-star wide receiver after he attended the Clemson-Georgia game as a guest of the Tigers. Powder Springs (GA.) Hillgrove High School’s (…)