Clemson football responded after reserve cornerback Fred Davis turned himself in to the Clemson City Police Department on Sunday. Davis was charged with reckless driving stemming from an accident on July 21.

The Clemson Insider reached out to an athletics spokesperson to get an official word on Davis’ status with the program.

“Fred Davis remains with the program but will be subject to internal discipline,” the spokesman said. “Grounds for internal discipline for misdemeanor charges like this are covered under the terms of the Clemson Student-Athlete Handbook, which says that the head coach can recommend a course of action, and upon concurrence of the designated CUAD administrator, administer sanctions.”

According to a statement TCI obtained from the Clemson City Police, the investigation showed Davis was traveling 115 MPH in a 55 MPH speed zone before colliding with a mail carrier vehicle.

Clemson police determined Davis’ speed severely limited his ability to navigate safely and caused him to lose control of his vehicle before crashing into the mail carrier. The driver of the carrier sustained significant injuries that will require extensive rehab.

Davis was booked and then released following a bond hearing on Sunday.

Clemson head coach Dabo Swinney will address the situation further when he speaks with the media later this week. 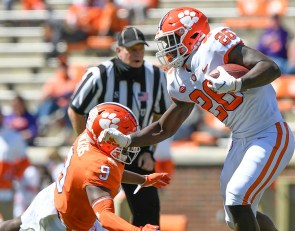