When the Jaguars wrapped up organized activities in June, Clemson standout Trevor Lawrence knew he needed more work with a few of his wide receivers.

That’s how the top pick in the 2021 NFL Draft decided to take a trip back to the upstate to work on timing with a few Jacksonville teammates and spend time together in Tiger Town.

“It was one of those things where we had a few weeks in the offseason and coming out of OTAs I knew we needed a little bit more work,” Lawrence said after training camp Saturday. “We are not getting all the reps together with some of the guys.”

Lawrence took a group of his teammates including wide receiver D.J. Shark to Clemson for a couple days in the middle of July.

They spent time on Lake Hartwell getting to each other better and worked out at the Allen Reeves Football Complex on campus.

When @Trevorlawrencee brings the boys to experience lake life in Clemson! https://t.co/gdSA65urWV

The Clemson grounds crew on site even painted NFL hash marks on one of the practice fields to assist Lawrence and his new teammates.

Love what’s happening here. @Trevorlawrencee getting some work in with his @Jaguars WRs at our facility (while hanging out at the Lake during their downtime!). The great Woody McCorvey asked our grounds crew, led by Mike Echols, to paint the NFL landmarks for them to be precise! pic.twitter.com/vFI1IbmuM3

For Lawrence the trip proved beneficial relationally and helped the Jaguars offense jump out to a stronger start at training camp this week.

“So I wanted to take a handful of guys over to Clemson for two days to throw, hang out, and just get to know them,” Lawrence said. “But also wanted to get some work in. So I reached out to those guys and they were great and I think it helped us a lot. We got back into it really quick in camp and it didn’t take a few days to work on our timing.”

Jacksonville’s training camp ramps up this week as it nears its first preseason game against the Browns on Aug. 14. 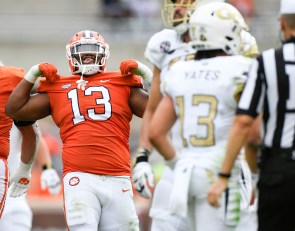 Clemson coach Dabo Swinney on Monday revealed his most experienced running back plans to enter the transfer portal. During his weekly press conference Tuesday, Swinney further commented on Lyn-J Dixon’s (…)

Clemson is making a change at the top of the depth chart at a particular position this week. Davis Allen is in line to start at tight end against North Carolina State on Saturday, Clemson coach Dabo (…)